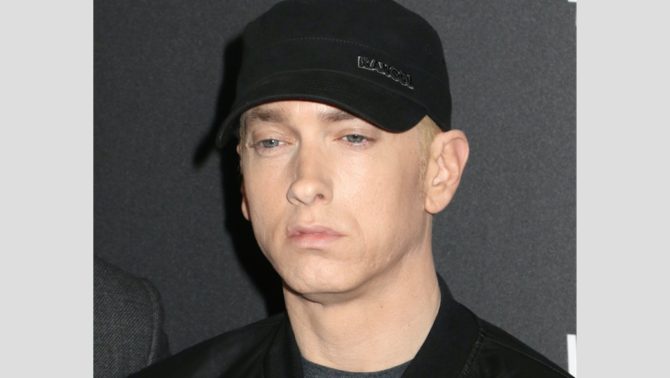 It’s 2018 and apparently, we’re doing this all over again.

The rapper is facing a new wave of criticism following the release of a surprise album last night titled Kamikaze.

It’s full of diss tracks (cool…), and the Apple Music description tells us “Shady punches back, and he’s naming names.”

Eminem takes aim at Tyler the Creator, who has been tentatively open about not being straight, on the track “Fall.”

Here’s the lyric that’s making everyone roll their eyes and ask: Come on, really?

Tyler create nothing, I see why you called yourself a fa*got, b*tch
It’s not just ’cause you lack attention
It’s ’cause you worship D12’s balls, you’re sac-rilegious
If you’re gonna critique me, you better at least be as good or better

Interestingly, the word fa*got is censored, even on the uncensored version of the track.

It’s as if Eminem is fully aware that his use of the slur is over the line, but he just couldn’t resist himself anyway.

Listeners have had a lot to say on Twitter:

WAIT DID EMINEM ACTUALLY USE THE HOMOPHOBIC SLUR IN HIS ALBUM? AGAINST TYLER THE CREATOR? IN 2018?

Eminem throwing hands at everyone on #Kamikaze but the best track is diminished by his same tired use of a gay slur. Marshall, you got dragged for it so many times before. C’mon, brother! https://t.co/OeQMujAhe8

Can't even say I'm surprised that Eminem is still using homophobic slurs in 2018 bc he's a fucking child but Justin Vernon, what the hell are you doing on the track man. pic.twitter.com/z2ySJBNF85

big 2018 and eminem still dropping albums with homophobic slurs on his songs, can this old man just call it quits already

Eminem claims not to be homophobic but continues to use anti-gay slurs in his music… Just because you ‘have gay friends’ doesn’t mean you get a free pass to use derogatory insults at the expense of the LGBTQ community. Save your fragile masculinity for your therapist.

What actually is the excuse for all the homophobic slurs in Eminem's music, I've never really understood that one?

let’s be clear on THAT! pic.twitter.com/RTodKIPt3G

I'm really really wound up by the fact none of this Eminem coverage mentions the fact he's STILL using homophobic slurs in his music [censored, reversed whatever it's about INTENTION], with some headlines even MENTIONING TYLER but not the actual slur?

If you still use that slur in a rap lyric, you're a homophobic ass and I don't fucks with you. Get your basic shit together, Eminem.