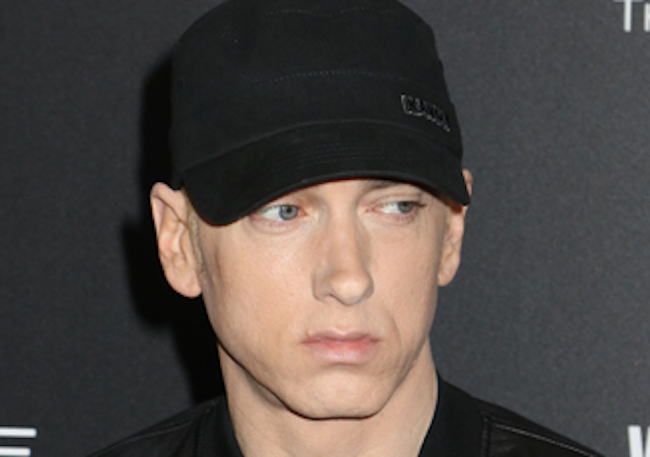 Quick question: Have you happened to send nudes to Eminem on Grindr?

As his ninth album takes a critical drubbing, Eminem continues making the rounds to promote his latest work. A conspicuously long-in-the-tooth interview with Vulture  yields some not-necessarily-sought-after details about his dating life: .

Do you date?
It’s tough. Since my divorce I’ve had a few dates and nothing’s panned out in a way that I wanted to make it public. Dating’s just not where I’m at lately.

When you were dating, how’d you meet people? Tinder?
I mean, yeah.

Are you being serious?
Yeah, Tinder.

Really?
[Laughs] And Grindr. I also used to go to strip clubs.

He’s almost definitely joking there, no? Either way, he doesn’t bother to elucidate in any way.

He does, however, open up about his lyrics, which are regularly construed as homophobic:

The first time I got a taste of being called anti-gay was on “My Name Is” when I said, “My English teacher wanted to have sex in junior high / The only problem was my English teacher was a guy.” All I was saying was I don’t swing that way. So when I started getting flack for it, I thought, Alright, you people think I’m homophobic? Watch this. Hence the Ken Kaniff character and all that stuff. I was trying to push the buttons of people who were calling me something that I wasn’t. The honest-to-God truth is that none of that matters to me: I have no issue with someone’s sexuality, religion, race, none of that. Anyone who’s followed my music knows I’m against bullies — that’s why I hate that f**king bully Trump — and I hate the idea that a kid who’s gay might get shit for it….

I’m sure people have misunderstood what I was doing. Again, I’m not a perfect human being and I’m sure that I’ve said things that went a little too hard, but I think my actual life shows — I mean, meeting Elton John and being as good friends with him as I am, that’s not me saying, “Hey, I’ve got a gay friend.” It’s me saying Elton John has my back. He’ll stick up for me.

Vulture even ventures to ask about the diamond-encrusted cock rings he apparently gave Elton John and David Furnish as a wedding present:

I don’t know, I put people on it and they made it happen. Actually, I had some diamond-encrusted cock rings, too. Right in my bedroom.

You can read the Vulture interview here.