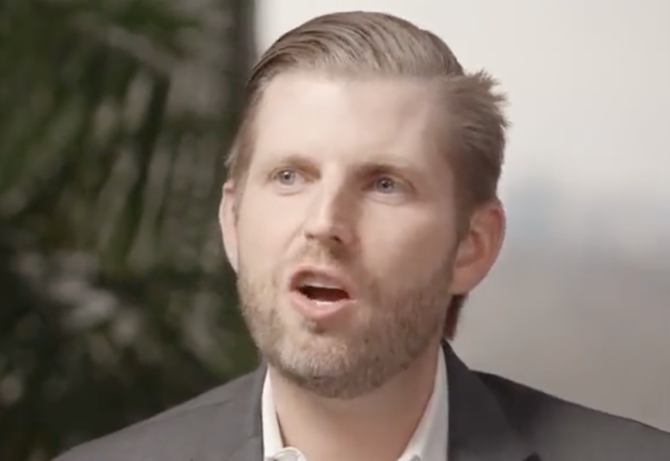 Eric Trump went on Sean Hannity’s show yesterday to whine about last week’s FBI raid on Mar-a-Lago and he somehow managed to accidentally broadcast the WiFi network and password of the studio where he was taping.

During the interview, the ex-president’s son said he has surveillance footage of the FBI removing 11 boxes of highly classified documents from a padlocked room in Donald Trump‘s basement and that he will “absolutely” release the footage “at the right time,” though he didn’t indicate when that time might be.

“Will you—you still have the surveillance tape, is that correct? Will you—are you allowed to share that with the country?” the Fox News host asked.

“Absolutely, Sean,” Eric replied, before adding, “At the right time.”

Then, without any trace of irony, he called for every law enforcement officer in America, including FBI agents, to wear body cameras for the sake of transparency.

Hannity: You still have the surveillance tape, is that correct? Are you allowed to share that with the country?
Eric Trump: Absolutely. At the right time. pic.twitter.com/5SwBKPqDVx

We’re guessing we’ll probably see those surveillance tapes around the same time we see Donald Trump’s tax returns (which, BTW, are still under audit) or his health care plan (which, we’re told, he’s still working on). Either that or during his impending criminal trial.

Oh, but it gets stupider.

Because shortly before the taping, Eric took a selfie and posted it to his Truth Social page. But, because he’s Eric, he didn’t notice that the photo also included the studio’s WiFi network and password.

We’re sure the studio’s IT guy was absolutely thrilled when he got into work this morning!

Eric Trump posted this on Truth Social — he’s going on Hannity — I see WiFi password and a criminal narcissist pic.twitter.com/UcEyi9j3cr

Of course, none of this is terribly surprising. Eric has never been known for paying careful attention to detail and the Trumps are perhaps the sloppiest criminal family in America and terrible keepers of secrets, as evidenced by, oh yeah, that FBI raid on Mar-a-Lago last week in which federal agents had to remove 11 boxes of highly classified documents that were being stored in a padlocked room in the basement.

No way @erictrump releases that footage (tho maybe on accident). Once he does, he exposes Trump’s lie in 4K lol

“I robbed a kid’s cancer charity, I don’t know how they caught me”

The IT guy hates Eric.
Facts

At the right time? It’s amazing really the people that fall for this, time after time.

The Very Stable Genius genes are strong in this one