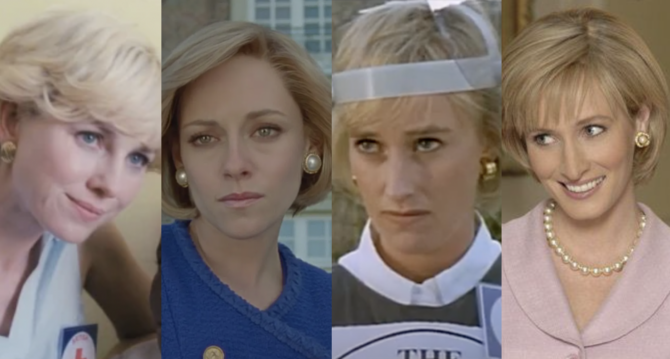 Kristen Stewart may become the second openly LGBTQ person ever to win Best Actress at the 94th Academy Awards this weekend. (Jodi Foster is currently the only Best Actress winner to publicly come out as LGBTQ during her lifetime.) The 31-year-old bisexual has earned widespread critical acclaim for her portrayal of Princess Diana in the film Spencer.

Related: Everyone is sobbing over that devastating new Diana doc that just premiered at Sundance

Many talented–and a few, ahem, not-so-talented–performers have played Lady Di over the years. The first was Catherine Oxenberg in 1982’s The Royal Romance of Charles and Diana, and the most recent was Stewart in Spencer. Elizabeth Debicki is set to play her in the upcoming season of The Crown, which arrives in November. And there will no doubt be countless more in the years to come.

In honor of Stewart’s Oscar nomination, we’ve decided to compile a list of every actress who has played the people’s princess in a film or TV show ranked from worst to best. We think we’ve got them all, but if we missed any, we sincerely apologize. There have been a lot!

Now, without any further ado…

16. Nicola Formby in Women of Windsor

The absolute worst depiction of Diana is, hands down, Nicola Formby in this three-hour made-for-TV debacle released in Canada in 1992. Totally awful in every way, it chronicles the lives of Princess Diana and Sarah, Duchess of York. It’s unclear how Formby, who had never acted before in her life, landed the role, but she would only appear in three more projects, mostly in bit parts, before retiring from acting in 1995, which was probably for the best.

In a blink-and-you’ll-miss-it performance, Lesley Harcourt appears as Diana in this 2011 Hallmark movie about the love affair between William and Kate. It’s nearly impossible to critique her breathy performance since she’s only on screen for about 60 seconds, but in those 60 seconds, she still manages to do better than Nicola Formby.

14. Amy Seccombe in Diana: A Tribute to the People’s Princess 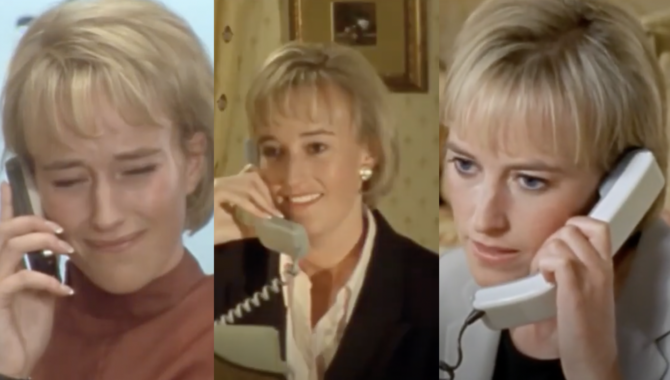 This 1998 made-for-TV movie (noticing a pattern yet?) aired in the UK and focused on the final year of Di’s life. Amy Seccombe manages to make the princess as mopey and unlikeable as humanly possible. In her defense, the script didn’t offer much and was mostly just a bunch of scenes of Diana gabbing on the phone interspersed with shots of her being chased by the paparazzi.

13. Caroline Bliss in Charles and Diana: A Love Story

ABC aired this dull retelling of Diana and Charles’ courtship in 1982 with ingenue Caroline Bliss in the title role. Her portrayal is neither here nor there and the movie is fairly standard ’80s made-for-TV movie fare.

12. Julie Cox in Princess in Love

CBS premiered Princess in Love, based on Anna Pasternak’s bestselling book about the love affair between Diana and Captain James Hewitt, in 1996. It features a horribly miscast Julie Cox, who looks, sounds, and acts absolutely nothing like the real-life princess.

11. Catherine Oxenberg in The Royal Romance of Charles and Diana

Catherine Oxenberg starred in this 1982 made-for-TV snoozefest about Diana and Charles’ fairytale romance. By this point in Di’s life, nothing particularly interesting had happened, and so the movie is just a series of boring vignettes that show the princess getting her hair cut or strolling through the gardens of her country estate. Yawn.

10. Catherine Oxenberg in Charles and Diana: Unhappily Ever After

Nine years after making The Royal Romance of Charles and Diana, Oxenberg reprised the role in this made-for-TV retelling of the demise of Diana’s marriage to Charles. By this point, Oxenberg was a much bigger star, having appeared on two seasons of Dynasty plus several other TV shows and a handful of movies. Unfortunately, her acting hadn’t much improved.

We debated ranking this around #13 in the list (above Caroline Bliss), but we felt because Jeanna de Waal seems like a genuinely nice person in interviews. Netflix dropped this cringy filmed presentation of the Broadway musical last year after several delays due to the pandemic. De Waal stars and, while she can carry a tune, the material she’s been given to work with is, as Jesse Green from The New York Times puts it, “aesthetically and morally mortifying.” The recording holds the unique distinction of being the first filmed stage performance to ever receive a Razzie Award nomination for Worst Picture.

Based on Andrew Morton biography about the Princess of Wales, this campy made-for-TV melodrama aired in the UK in 1993 and chronicles Diana’s life from adolescence to her breakup from Charles. Despite Thomas’ best efforts, she can’t quite overcome the soapy dialogue, though she does absolutely nail a dramatic fall down the stairs, which is why we’re placing this one so high (but still very low) on this list. 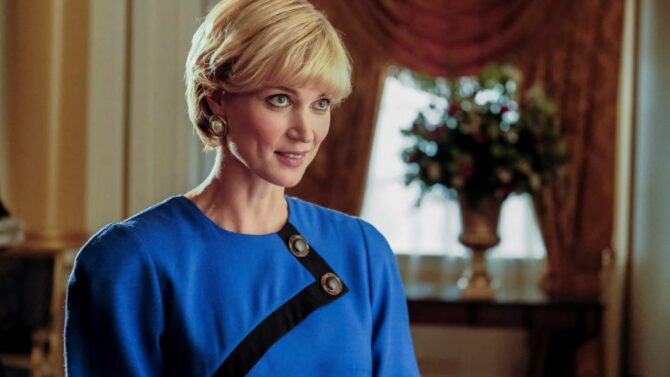 From 2018 to 2021, Lifetime broadcast not one, not two, but three original movies about Prince Harry and Meghan Markle–Harry & Meghan: A Royal Romance, Harry & Meghan: Becoming Royal, and Harry & Meghan: Escaping the Palace. Soper was one of the few performers who appeared in all three installments. The movies are crap, but her resemblance to Diana is not bad/borderline good. 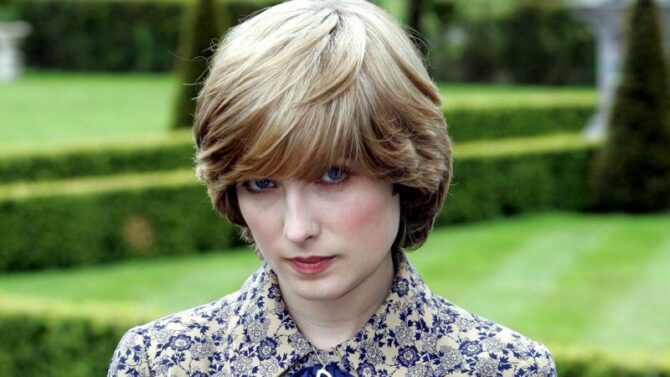 It’s taken a while, but we’ve finally made it to the more palpable performances. Diana was only a supporting character in this 2005 dramatization of Charles and Camilla’s affair. Duncan has less than 15 minutes of screen time, but she is convincing as a virginal young woman unwittingly caught up in the love triangle of the century.

5. Genevieve O’Reilly in Diana: Last Days of a Princess

Genevieve O’Reilly bears almost no physical likeness to Diana in TLC’s 2007 dramatized documentary about the events leading up to her death, but she still manages to capture her voice and mannerisms better than most of the other actresses before her. It’s a genuinely decent performance.

Poor Naomi Watts thought she was going to win an Oscar when she starred in this dramatization of the last two years of Di’s life in 2013. Sadly, she received a Razzie Award nomination for Worst Actress instead. Frankly, we’re not sure she deserved the level of vitriol she received. The film felt like a missed opportunity, but Watts was good in it, despite being almost 10 years older than Diana at the time of her death.

Most people probably haven’t seen this one, but Katie Brayben plays the ghost of Diana in this spooky 2017 made-for-TV supernatural fantasy that imagines what will happen when Queen Elizabeth II dies and Prince Charles ascends the throne. In what basically amounts to a cameo, Diana emerges from the shadows of Buckingham Palace late one night to tell Charles, “You think I didn’t love you. It’s not true.” It’s totally weird and creepy, but Brayben does a solid job.

Not everyone agrees on Stewart’s portrayal of Diana. A lot of people think she was great in Spencer, but there are those who weren’t impressed. Regardless, she’s the first actress out of a looooong list of actresses to be nominated for an Academy Award for playing the princess. Will she win? We’ll find out Sunday night!

1. Emma Corrin in The Crown

And now the one you’ve been waiting for. Non-binary performer Emma Corrin received widespread acclaim, a Primetime Emmy Award nomination, and the Golden Globe Award for Best Actress–Television Series Drama for her work in season four of The Crown. In our humble opinion, she was better than KStew, so she’s our #1 pick. Our only regret is that she won’t be returning for season five, though we’re very excited to see what Elizabeth Debicki brings.

Who’d we miss? Who’d we get wrong? Share your thoughts in the comments below…