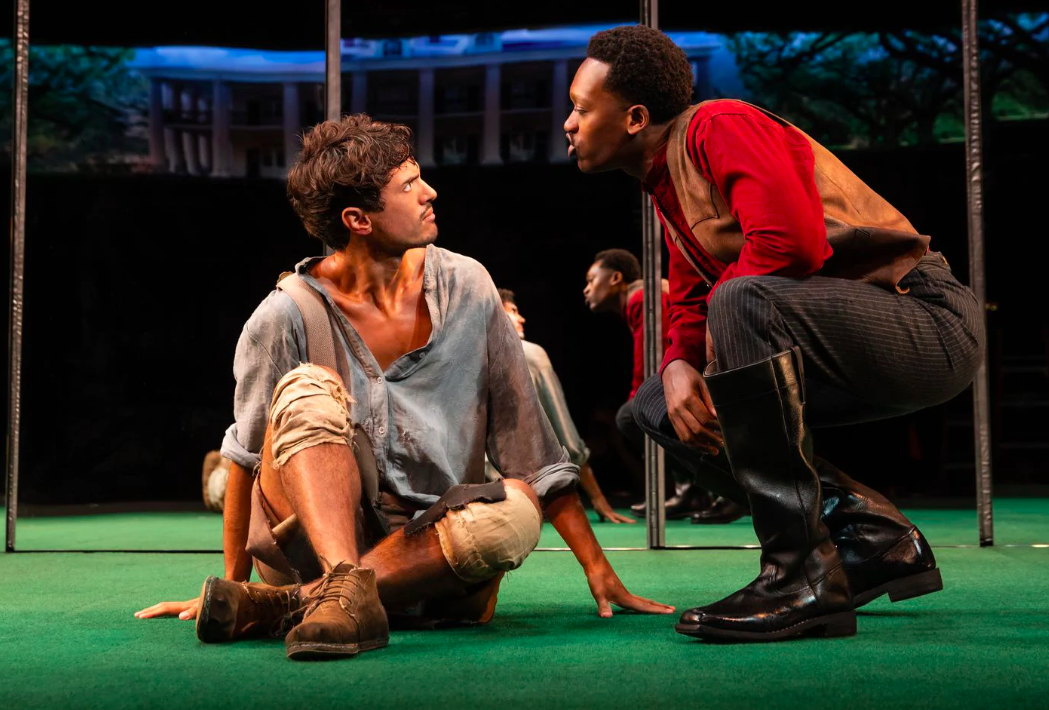 Set on a plantation in Virginia, Jeremy O. Harris’s racially-charged play explores control and obedience through three interracial couples—one of which is same-sex male—roleplaying as slaves, overseers, and masters to fix their sex lives. The couples are taking part in an experiment called Antebellum Sexual Performance Therapy (aka “slave play”), which is designed to help the Black participants rekindle their desire for their white partners.

While Antebellum Sexual Performance Therapy isn’t real, it damn well could be, because as on-stage therapists helped their patients navigate their experiences and unresolved trauma, I, too, was unpacking my issues.

A few years ago, I was hooking up with a white dude I met on Grindr. I was in my late 20s. He was in his late 30s. When he opened his hotel room door, he towered over me. He was friendly and offered me a glass of wine before we got down to business. While going down on him, he asked me if I liked it. I replied an enthusiastic, but sultry yes. He continued, “Good. Because I love a Black man on his knees.”

Related: Why the black gay romance on ‘Pose’ is still such a big deal

Each one of his words slowly exited his mouth and washed over me like cement being poured onto a street. I was frozen at first but eventually found the words to tell him I had to leave. He apologized, but I grabbed my shit and bounced.

That was one of many casually racist encounters I began to encounter in the gay community—either in person or on the apps. The only racism I’ve ever encountered has been in interactions with white gay men in regards to sex. In fact, the only people who have ever called me nigger have been gay white men. The objectification, the fetishization, and the racial slurs hurled at me when I’ve respectfully declined a “looking?” message started to really fuck with my mind—and my dick. So much so, occasionally it impacted my performance.

Just about every time I sign into a dating app, I inadvertently engage in race play. So, seeing it play out on stage before my eyes on The Great White Way, was at first triggering, but then it became therapeutic.

In Slave Play, Alana roleplays as the mistress of the plantation while her biracial boyfriend Phillip acts as her well-dressed house negro. While debriefing the experience, Phillip reflects on his experiences as a teen as one of the only Black faces in a predominately white school, and he shares an experience that nearly jolted me out of my seat.

Phillip recalls a white teammate in a locker room saying to him he forgets Phillip is Black until he sees his big dick.

Until that moment, I totally forgot about a white classmate saying those exact words to me in the locker room in high school. And because I must have buried the moment away, I didn’t even realize it impacted me today—like Phillip—and how traumatic it has actually been to my sense of self and how it has all manifested in just about all of my intimate relationships with white men and my own dick.

So, there I am trying to watch this fine play, but I’m replaying all of the shitty things white men have “innocently” said to me.

This is another amazing thing Harris does with Slave Play. All of the white partners seem to try to separate themselves from their whiteness. As if they are neutral and none of what’s happening has anything to do with them. They are all, assumed to be well-meaning, educated people. And racism? That’s for racist Southern folk.

But like my own experiences having only experienced racism by gay white men in big cities like NYC, that’s where these characters live. It’s an incredibly smart way to show how whiteness in the north is just as harmful and violent as it is in southern states.

If you’re a gay, Black man who is an equal opportunity lover or banger, Slave Play is going to punch you in the gut and ask you to reflect on your sex life not to mention your love life.

And if you can’t get to the theater, get to your therapist so you can unpack any trauma and leave it in this decade.