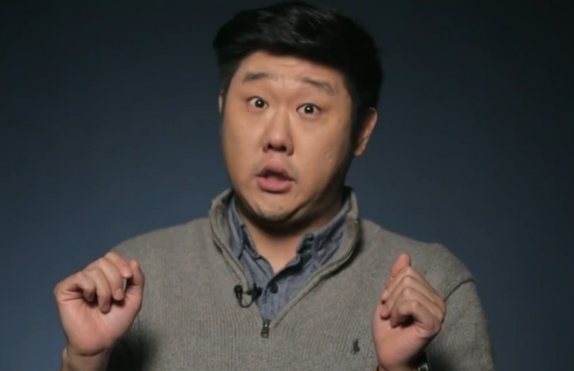 Peter Kim is a Chicago-based comedian and self-described “fabulous husky gaysian” and he has something to say about the subtle tones of white supremacy he is forced to deal with on a near daily basis.

Kim recalls going to an audition where a man complimented him for being “almost white.”

“Me, an Asian-American, being almost white? Meaning what?” Kim asks. “That I’m not black or Latino or any skin complexion darker than white? In saying so, he’s assuming that white people are the default race in this country, that I am almost normal.”

“And this isn’t some ignorant racist,” he adds. “This is a liberal creative person living in Chicago.”

But it doesn’t stop there. Kim says the problem is everywhere.

“You see, this happens to me all the time, even in places I never thought would exist,” he explains. “See, I’m a Korean man who’s also gay. And when I finally came out and downloaded the dating app Grindr–spoiler alert, ain’t nobody dating on Grindr–I was overwhelmed by profiles saying no fems, no fats, no Asians.”

Related: Asian Man Fed Up With Being Ignored By The “White-Painted Gay Community”

And then there is the question he can’t seem to escape no matter where he goes.

“When I get asked the question where are you from, and I respond, ‘Oh, New York,’ most of the time, well-meaning white people get upset and ask, ‘You know what I mean. Where are you from-from?'” Kim says. “My boyfriend, who is from Minnesota, whose family has roots in Sweden, never has to explain where he’s from-from.”