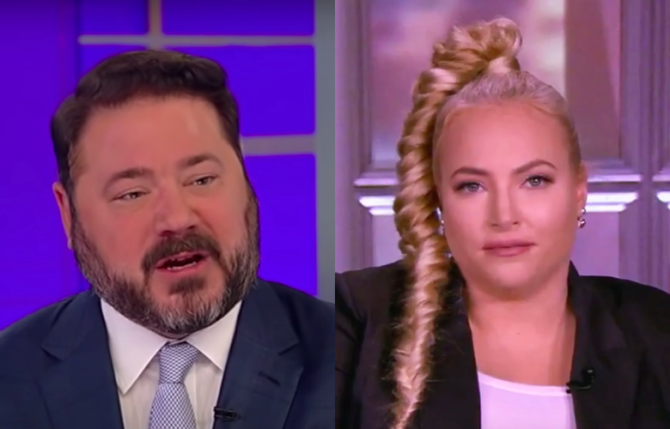 Fact checkers on Twitter were quick to correct Meghan McCain after she called her homophobic husband, Ben Domenech, “sexy” and “brilliant” while promoting his appearance on Fox News this week.

My sexy, brilliant husband @bdomenech is hosting @FoxNews primetime tonight and all week! Tune in! ????????????

Domenech is the co-founder of the vehemently anti-LGBTQ publication The Federalist.

In addition to publishing countless homophobic and transphobic hit pieces, he has a looooong history of making disparaging remarks about queer people on Twitter, and he once had to issue an apology to SCOTUS Justice Elena Kagan for trying to out her in a blog post. (He later had to issue a second apology when his first apology ended up not being an actual apology.)

Immediately after writing the tweet, McCain, who never misses an opportunity to crow about free speech or how much she hates cancel culture, quickly disabled the public comments. We can’t imagine why!?!?

But thank god for Tweet Quotes. Here’s what fact checkers are saying…

Not your homophobic husband. https://t.co/xZzzkIyunt

He is neither sexy or brilliant but thank goodness he's yours @MeghanMcCain! https://t.co/9DSRyPJMZX

Your mom is great. But, your husband is none of these things you claim. But, you must know a lot of people think this way since you blocked replies.https://t.co/CSM1faLt7e

You are such a control freak you’ve turned off your comments from anybody but your friends. I thought you were going to quit Twitter https://t.co/2hmc3GUKBl

nope just another lying insurrectionist Fox once again can't find honest good help, I guess what the cat dragged in will have to do. https://t.co/aI4CzyIQTE

truly don’t understand how you continue to associate with the network that uplifted and continues to uplift a disgusting man who was terribly disrespectful to your family and so many ppl who call you their friends there just stood by and practically said or did nothing https://t.co/K3sN71jAJ6

Such a snowflake you won't even allow people to comment. Anyway, your husband is neither sexy or brilliant. ? https://t.co/ShffaPdd87