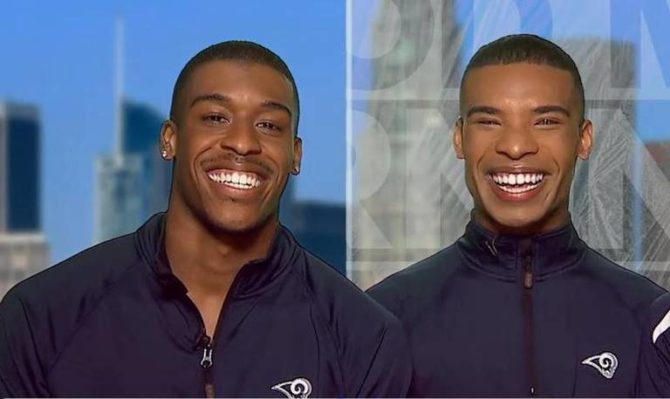 In a refreshing move away from the controversies currently plaguing the NFL, this Sunday’s Superbowl will feature a history-making event. For the first time, two male cheerleaders will take to the field in support of their teams.

Napoleon Jinnies and Quinton Peron caused a stir in 2018 when they auditioned for–and made the lineup of–the Los Angeles Rams cheerleading squad. Both out-gay men, Jinnies and Peron wondered why equality of the sexes didn’t translate to the cheerleading team. Unbowed by precedent, the two decided to audition for the Rams’ squad.

“This [audition was] about three weeks long and we had a bunch of rehearsals in between and an extensive interview process, but it was really humbling and amazing to be invited every time you came back,” Jinnies told Good Morning America in 2018. The addition of Jinnies & Peron made international headlines.

Last year, Queerty honored the pair and their achievement as part of the Pride 50.

The inclusion of Peron & Jinnies will mark the first time in recent memory men have participated in an NFL cheerleading squad. The move will provide a breath of fresh air following on-field player protests against police violence against people of color.

Quarterback Colin Kaepernick kicked off the protest in 2016 by kneeling during the national anthem. A number of other players followed suit, sparking a major controversy within the league. Throughout the 2018-2019 season, the league had approved a policy forbidding on-field protests and requiring players to stay in the locker rooms during the anthem as a form of protest. As a result, a number of musical artists declined the invitation to perform during the halftime show.