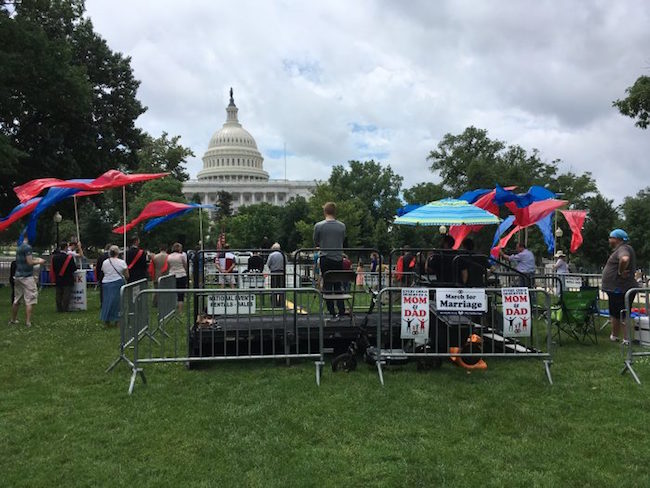 Each year, The National Organization for Marriage (NOM) organizes a “March For Marriage” in Washington, D.C. And each year, the number of attendees drops significantly. Chances are, there were twice as many people at your local gay watering hole on Sunday afternoon than participants in this year’s iteration of the antigay march.

Reportedly, less than 50 people showed up. As Twitter user Beth Ethier notes, there were 47 attendees in all, including babies. (Why would you include babies?) That’s an absurd drop from the number of attendees who participated in the march’s first year back in 2013. (That number was somewhere between 2,000 to 15,000, depending on which liar did the tallying.)

Related: Bodybuilders band together for the most homoerotic antigay protest of all time

As the below photo demonstrates, they may have included cow skulls and tumbleweeds in their final headcount:

Brian Brown addressing a crowd of around 30 people at this year's anti-gay March for Marriage #equality pic.twitter.com/mKEMY5TcK2

Fifteen minutes before the event was scheduled to begin, about 20 adults were milling around an empty stage while several children worked to unfurl large red and blue banners to carry during the march. One passerby wondered whether they were going to a kite festival. Gradually, a few more participants arrived, including five men wearing the signature capes of the group Tradition, Family and Property and carrying a “Honk for Traditional Marriage” sign.

“We are on the side of truth,” he said, as somewhere, a candy wrapper floated by on the breeze.

“We are on the side of true human rights, we are on the side of true civil rights. And in every fight for civil rights, it took a creative minority who were willing to stand up and speak truth to power no matter what the cost. And you know what? There may not be thousands of us here today. It doesn’t matter. There were only a few that stood with William Wilberforce when he stood up and said ‘no’ to the slave trade in England. He was mocked, he was derided, he was laughed at. We remember him as a hero now, because ultimately his life’s work was successful, but it wasn’t successful in his own lifetime.”

“Every year, we’re going to be here whether there’s thousands or hundreds or tens.”

Brian Brown surveying the thin turnout for his anti-gay March for Marriage, which a few years ago drew 2-3,000 to DC pic.twitter.com/PXUfmrf9Qn

You can watch NOM’s 1-minute vid about the March below. But don’t bother.