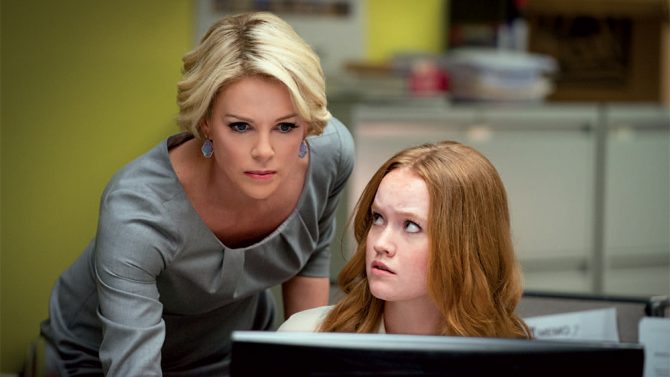 A former Fox News producer is pushing back against depictions of gay culture at the “most polarizing brand in cable news” in the new film Bombshell.

Erin Gaetz was a producer at Fox News from 2013 to 2015 before leaving to work for Jeb Bush’s failed presidential campaign. She openly calls the network the “most polarizing brand in cable news,” but is it as horrible as Bombshell makes it seem?

According to Gaetz, the answer is no. (Remember, of course, that she’s a Fox News alum, so you can decide what that does to her credibility.)

In a new article published by Spectator, Gaetz addresses some of the alleged inaccuracies in the film, including the idea that everyone who works there is “a red-meat, MAGA-hat-wearing Republican.”

“This comes as a surprise to most people, though it probably shouldn’t,” she writes. “On the team of about eight people I worked with at Fox Business, I would estimate that party affiliation was evenly split amongst Republicans and Democrats.”

“So the next time you or a loved one is driven to a near fugue state by a segment on Tucker Carlson, know that it may have been produced by someone with a ‘Warren for President’ bumper sticker.”

Somehow we doubt that, but OK.

Gaetz also talks about gay culture at the network and insists the film got that totally 100% wrong.

“McKinnon’s character is gay–but she goes to great lengths to conceal her sexuality at work, where she fears it will hinder her career advancement,” she writes. “This couldn’t be further from the truth.”

According to Gaetz, the offices at Fox News are brimming with proud members of the LGBTQ community.

“There are plenty of producers–many of whom work on high-profile shows–who are openly gay,” she asserts.

In some ways, this is great! A major network is employing LGBTQ people and putting them in leadership roles on some their most important shows… until you realize that those very shows give platforms to antigay politicians, pundits, and activists who are actively working to mislead people and dismantle LGBTQ equality.

Speaking of her alleged openly gay former colleagues, Gaetz writes: “They decorate their cubicles with pictures of their spouses, bring their partners to work events and speak openly about their relationships.”

She continues, “Many of the anchors are outspoken supporters of the LGBTQ community. Though I am sure there are people who choose to keep their personal live private, the idea that it would be scandalous to be gay at Fox is false.”

Hmmm. We’re not sure which Fox News anchors are “outspoken supporters of the LGBTQ community.” Gaetz doesn’t mention a single one by name and we can’t think of any ourselves.

Laura Ingraham has a gay brother and yet she regularly attacks LGBTQ people on her show. Tucker Carlson gleefully admitted to committing a hate crime when he and his friend beat up a gay man for looking at them. And the only out news anchor, Shep Smith, was forced to abruptly leave network earlier this year.

One thing Gaetz claims the movie does get right, however, is the idea of “making your grandma scared or your grandpa angry.”

“This, maybe more than anything else in the movie, was completely true of my time there, albeit in less sinister terms,” she writes.

“In our morning rundown meetings, we frequently posed the question to each other, ‘Will Grandma and Grandpa Heartland care about this?’ If the answer was no, good luck getting your story on the air. The saying ‘if it bleeds, it leads’ exists for a reason.”