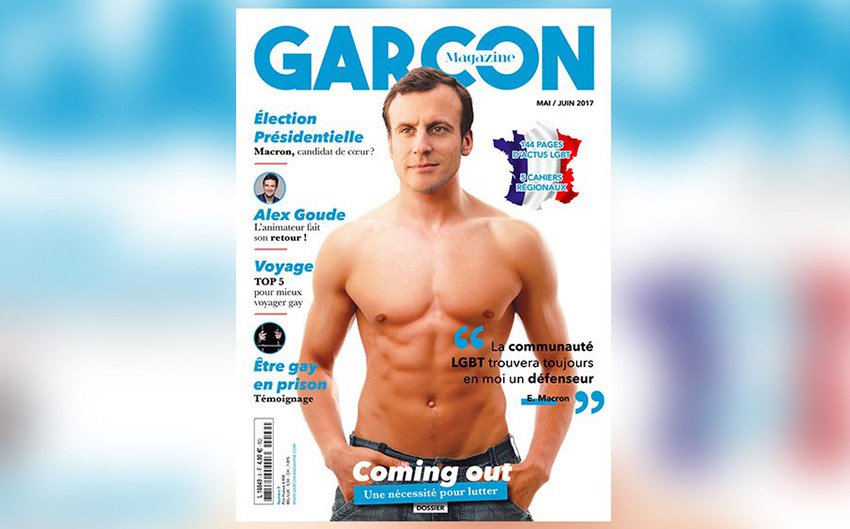 In case you haven’t heard, France is in the throes of an intense presidential campaign between two polar opposites: Emmanuel Macron, a young, pro-LGBTQ liberal, and Marine Le Pen, the antigay daughter of a Nazi sympathizer. The candidates are currently running neck and neck.

This week, Garcon, a bi-monthly magazine that caters to gay men, featured a topless Macron as the cover boy. Underneath him is the headline: “Coming out: a necessary fight.”

Reporter Tristan Barreiros, who writes for Garcon, tells Mashable that the picture was photoshopped and that the decision to run the cover story on “coming out” was meant to be ironic.

39-year-old Macron is straight but he is a longtime supporter of same-sex marriage, which is something his opponents have tried using against him. Throughout the campaign, they have accused him of being closeted, spread rumors that he was having a gay affair, and suggested he is backed by “a very wealthy gay lobby.”

Macron, who’s been happily married to a woman for ten years, has repeatedly denied the allegations and said he loves his wife “very much.”

Garcon‘s editor-in-chief Christophe Soret says in a statement that the decision to feature Macron was made in an effort to address “the controversy about the possible homosexuality of the candidate” head on.

“[Macron] clearly explained himself by indicating that he loved his wife and had no connection with a man,” Soret says. “We do not revive this false story; we fight it!”

He also hopes it reminds the future president, whomever it may be, that the LGBTQ community in France “will continue to fight to defend our right to sexual difference which is not a choice but a fact.”

France will vote for its new president on Sunday.