Two men who got engaged on Valentine’s Day say they were very surprised to be refused service at a North Carolina wedding venue.

Grooms-to-be McCae Henderson, an attorney, and Ike Edwards, a cosmetic dentist, told their story to WDTV.

They said after getting engaged, they began to look around for venues. They filled out an inquiry form for the beautiful Highgrove Estate in Fuquay-Varina, NC. The venue charges between $4,000 to $7,500 for ceremonies and promises to offer “the best of Southern hospitality.”

On the estate’s form, where it asked for names, it only offered boxes for ‘Bride’ and ‘Groom’, so the men added a note saying they were both grooms.

The venue responded saying because of the owner’s Christian beliefs, it could not host them, and instead offered them some alternative suggestions.

The owners of Highgrove Estate claimed to WDTV that they did not discriminate.

“Highgrove has always welcomed vendors, guests and employees of all orientations and we do not discriminate against a people or group,” a spokesperson said.

“We believe in the sanctity of marriage as God says in the Bible that marriage is between a man and a woman and we choose to honor Him above what the world decides what marriage should be.”

The spokesperson said they understood the couple’s frustration but said the venue’s team were now the ones feeling attacked.

“We have been respectful and kind when letting them know we are not the best fit for them. When magazines and others chose not to do business with us because of this position, we respected that decision. That is their right. We do not judge them or retaliate because they chose to not respect our religious beliefs.

“The argument can just as easily be the same for us as we’re being made to feel like the other. We are not the ones attacking, slandering and threatening others for their beliefs.”

“Highgrove Estate desires that all people’s weddings to be the most joyful in their lives. Highgrove also respects people’s differences regarding marriage.

“For this reason, we will always be kind and caring when these differences arise. Although Highgrove knows it cannot deliver what is being requested as the company holds strong to its Christian beliefs.” 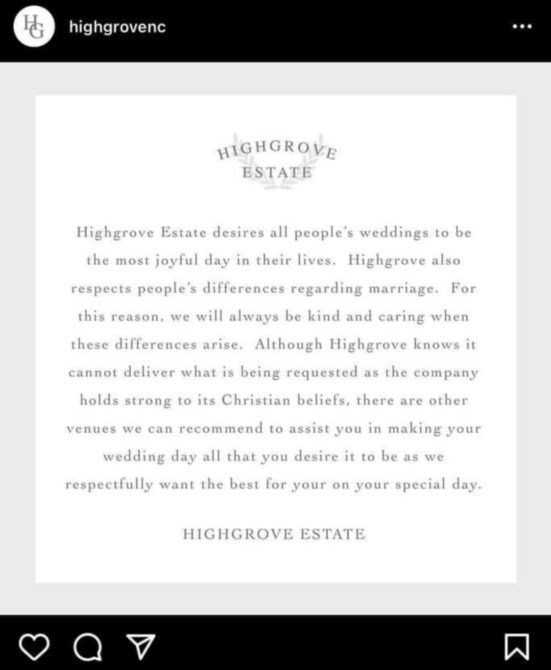 The U.S. House of Representatives recently voted in favor of passing the Equality Act but it faces a battle to pass through the Senate.

Related: 70% of voters support the Equality Act even as Senate Republicans try to stop it

One local GOP lawmaker said the venue had the right to turn away the couple.

Since the story broke, Highgrove Estates has received backlash. At least one other couple have canceled their planned wedding there.

The venue has removed its Facebook page and set its Instagram page to private. It also says it has received one threatening message, which it has reported to the police.

“The backlash is sad, it’s been aggressive, hateful and designed to cause fear,” said a spokesperson. “What they are asking is for us to believe just like them and they will leave us alone. We stand by our beliefs in the sanctity of marriage and that is not going to change. We wish (McCae Henderson and Ike Edwards) to find the very best venue and that their special day is wonderful.”

Henderson and Edwards said they didn’t condone any threats of violence against the venue and wouldn’t allow this episode to detract from the excitement and joy of their upcoming wedding.