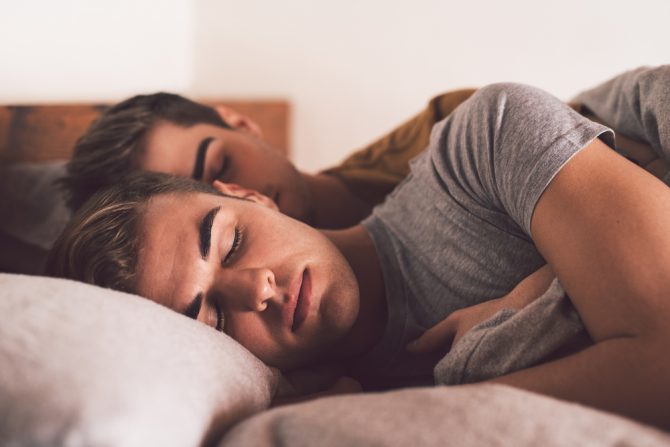 Turns out, men love cuddling with other men, regardless of sexuality. A British study published in 2014 found that nearly 93 percent of college men said they shared a bed with another guy, and as we’ve previously reported, some straight guys even seek out therapeutic cuddle groups with other men.

Need other anecdotal evidence? After one Reddit user asked the users of r/askgaybros if they’ve ever cuddled or shared a bed with an attractive straight friend, many commenters related experiences of snuggling and spooning their hetero brethren. (One user, however, called out the subreddit’s “fetishism for straight men,” calling it “unfathomable to most.”) Below, edited for clarity and relative SFW-ness, are highlights from the thread.

“One time, there were four of us at a friend’s house with three beds. Among us three visitors, one knew I was gay, the other didn’t. He invited me to share with him, which was nice and made the situation less awkward. I got in bed and tried to distance myself as much as possible. In the morning, he woke up first and started poking/tickling me in my butt/back/belly/feet to try to gradually wake me up. I liked it, though, and pretended not to notice as long as possible so he wouldn’t stop. I also tried to hide my growing boner as he was doing it lol. He was a little cute, and if he liked guys, I would date him, but our next stop was his girlfriend’s apartment, so that was the last time. But I still remember enjoying it.”

“I went to a weekend conference once in college before I realized I wasn’t straight, and we had to share beds at the hotel. There were two beds and four dudes to a room. I hadn’t really talked much to the guy I ended up sharing a bed with beforehand — it was a big group — but I thought he was pretty good-looking (because all ‘straight’ guys think about that). So, we put the heavy top blanket between us as a divider before sleeping. The other two in the room woke up first and told us that by morning that blanket was on the floor, I was big spoon he was little spoon, sound asleep. I was the last one up, so I don’t know what his reaction was, but even though we hung out some the previous day, we didn’t that day, and it was the last [day] of the trip.”

“As a marine during combat training, we used to sleep outside in the field, and it would get super cold. The only way to warm up would be to share a sleeping system/mosquito bag or cuddle up in a pile. Never thought anything sexual about it, even though we would play grab-ass. I saw them as brothers. But before this, in high school, I shared a bed with my best friend every day because we basically lived together, and he was mostly straight, but one day things got pretty gay, and we f*cked.”

“As a teen, I would sleep in the same bed with different friends if I stayed over. One time one of them reached over and put his arm over me and grabbed me. I was too scared to do anything, so I just pretended to be asleep. He eventually moved it. Not sure if he was ever curious or not, but he went on to have two kids, and he seems to only be into women as far as I can tell. As an adult, I sleep on my friend’s bed when I go visit him. He knows I’m gay and is really comfortable. I don’t see him that way, so it’s just two friends sharing a bed.”

“I’ve shared a bed with friends, one I thought was attractive. No cuddling or spooning though with any of them. My friend group’s masculinity is way too fragile. Plus, I wake up with morning wood almost every day, so I likely would distance myself/sleep on the edge of the bed with my back turned to the other guy and never dare sleep in my boxers in that kind of situation.”

“I was on a competition trip in college, and our hotel arrangement was four guys in one room. They were all straight, and it was assumed I was at the time because this was long before I’d crack the closet door. One of them was a marine guy. The other three guys decide to immediately strip to their undies in the hotel room, and I follow (and then get under the covers to hide my boner). The marine guy and his buddy shared a bed, and then it was me and this stranger who wasn’t bad-looking himself. We never intentionally cuddle, but we end up back to back in the middle of the night. Other than that, I had a couple of best friends when I lived in Oklahoma. Of my two ‘straight’ friends when I lived in Oklahoma, both were bi but extremely uncomfortable with their sexuality, and we never did anything. One of them I could at least share a bed with, but we’d never cuddle, and we’d always wear clothes. The other had too much internalized homophobia to even share a bed. He never came out to me, but I knew he was bi or gay because of something I saw in his Internet history and various things he’d bring up that hinted he knew something of gay culture and then later deny he ever brought it up.”

“I did once. My best friend, who is straight, and I went overnight hiking in the Smoky Mountains. It got a lot colder than we expected or prepared for. In the middle of the night, we were freezing, painfully cold, and our teeth literally chattered. So, he suggested we cuddle up together, and we did. We cuddled as close and tight as we could until morning. Being as gay as I am, I did get a hard-on, as much as I tried not to. He didn’t notice, I don’t think. … We love each other like brothers or more, and I never felt so close to anyone, even with no sex.”

“Sharing beds many times, with multiple different guys in our friend group, full on spooning only once. We’re all very rational and supportive of each other, so when it makes sense to share a bed it happens, and I don’t overthink it.”