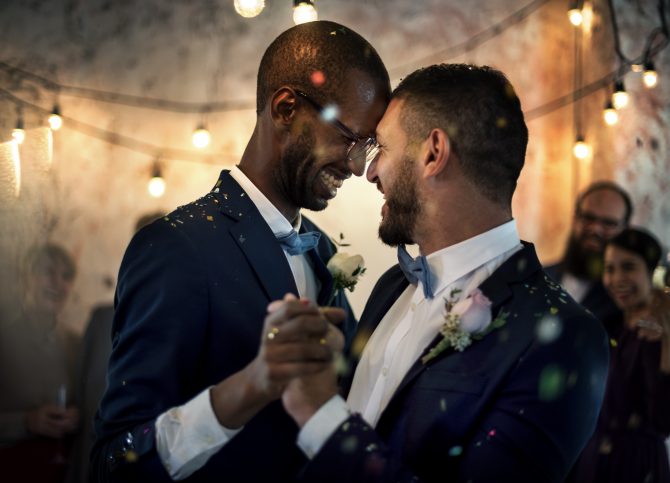 Who says love is dead? Dudes in one thread of the r/askgaybros subreddit have been sharing the most romantic things that have ever happened to them, and their stories of gallantry, devotion, and intimacy are enough to make even the most hardened cynic a hopeless romantic. Here’s a selection:

“[I] had a hookup a few months back. We were both pretty uncomfortable and felt awkward about it. I figured it was one and done. A week or two ago, I saw a very pretty gay at Target and realized it was him. He asked if I wanted his number. Gave him mine. Ran into him again at a different home goods store and got his. We went out for our first date last week, and I’ve never felt so excited just being around one guy. We went to an art museum, and there was so much furtive glancing at each other [and] touching the small of each others’ backs, and we kept complimenting each other. When he kissed me goodbye, it literally took my breath away. It was so nice to have a moment of romance in my mid-30s.”

Related: An Iraqi soldier and a U.S. soldier found wartime love in Iraq

“When my boyfriend and I are at a crowded event or party and he is on the other side of the room, he always winks at me.”

“When my ex would take me out on motorcycle rides through Seattle and around the Puget Sound. I could close my eyes and hold onto him without a care in my life.”

“Me and the BF were sitting on the couch snuggling under a blanket while his friends were over. We were watching a horror movie, and he pretended to be scared and grabbed my hand. While doing so, he slipped his promise ring onto my hand. I was so flustered, I think I short-circuited.”

“I have the stomach flu or something right now, and my husband has been feeding me soup, giving me medicine, putting blankets on me, etc. Generally just taking care of me, and I think it’s sweet.”

“My boyfriend and I met on Reddit, and we met for the first time over the weekend, and he made a cheesecake and brought it to the Airbnb, and it was very sweet, literally and romantically.”

“My birthday used to make me sad — long story — so I didn’t really tell people about it, and only a few close friends knew the date. One friend in particular refuses to ignore it and buys me something small to eat on the way to work every year. My boyfriend found out this year when my other friend presented me a McDonald’s breakfast as he dropped me off for work, and by the time my shift was over, he had gotten a slice of cake and bought me new earbuds because mine were broken at the time. He drew up a little comic of me as a superhero for a card — something I once did for him when we were in high school — and attached the sweetest note to the back. I stopped hating my birthday.”

“When my husband and I got married, he gave me a family heirloom as my wedding ring. It belonged to his great-grandfather. We took the ring to get sized after we left City Hall. The jeweler told us he would have it ready the following week. My husband coaxed him to have it done within a few hours. We went to dinner. We returned to the jeweler to pick up the ring. It wasn’t ready, but the guy said it would be done as promised. We waited. He was very busy. True to his word, he brought the ring out. It fit perfectly. My husband was adamant I had the ring to wear. When he first showed me the ring, I was not sure I would wear it. I like minimalist designs. It was far from that. It had a diamond, which I was not a fan of. Perhaps it was the box it was in, and it hadn’t been cleaned for years. Sized, cleaned, and on my hand, the ring was gorgeous. It is gorgeous. My husband said that a special guy deserves a unique ring, not something basic. It is an art deco white and gold ring with etching and diamond in the middle.”

Related: Teen falls in love with his “straight” lifelong friend, who then kisses him out of the blue

“A couple years ago, I was dating a guy I had met on Jack’d. It was unlike any other experience. We had been going on dates for almost two months. Really old school. It was a summer night, and we had gone to Navy Pier [in Chicago]. We had gone on the Ferris wheel, gotten on the swinging seats. He was 2, and I had just turned 22. I remember buying two drinks and secretly handing him one. The pier was crowded, and there was live music playing. We were watching people dancing, laughing, and drinking merrily. And that’s when, unexpectedly, right before us, we saw the fireworks display come on. We hadn’t planned on seeing it. But I remember looking at him and him looking at me. And that’s when we leaned in and kissed for a good five to seven seconds. We didn’t care who was around. It just happened. For me, it was the most romantic experience ever to this day. His name was Josh. Josh the redhead from LaGrange. Good ol’ memories.”