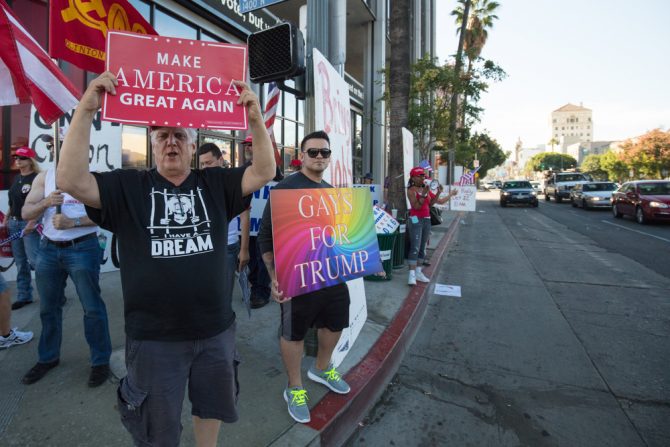 A gaggle of gay Republicans are planning to hold a surprise pro-Trump march in West Hollywood, California tomorrow night.

The “Gays and Housewives Take Over WeHo” march is scheduled to happen Friday evening around 10 p.m. in the heart of West Hollywood. It is being organized on the DL by the Log Cabin Republicans.

“Wear your Trump/MAGA gear … to help show how much love there is for Trump in the LGBT and Ally community,” the private invite reads. “Tell all your gay and housewife friends to come.”

Related: Seriously, nobody have sex with this awful gay Trump superfan

The march, although short, is likely to attract a lot of attention in a city where 33% of the population identifies as gay men and only 9% of voters are registered as Republicans. The group has alerted the Sheriff’s Department to its plans and asked its members not to post information about the event on social media because it might attract opposition.

No mention of the march is made on the Log Cabin LA official website, which reads “No events yet” on its calendar page.

Among the attendees will be several gay conservative social media influencers you’ve probably never heard of, like some guy named Rogan O’Handley (a.k.a. DC Draino) and David Leatherwood (a.k.a. Brokeback Patriot), who Queerty covered earlier this year.