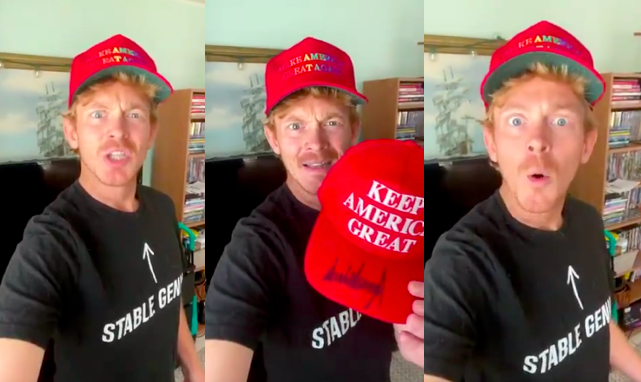 Meet @BrokebackPatriot. He’s a gay MAGA superfan on Twitter who insists Donald Trump actually “likes all LGBT Americans” because he sent him a signed “Keep America Great” again hat… presumably after he purchased it online.

According to his Twitter page, Brokeback Patriot is a 32-year-old “free thinking” American who lives in St. Petersburg, Florida and likes telling people to “choke on it.”

He recently shared a video with his 12K followers, showing off his new autographed red hat and boasting about how it serves as proof that Trump is actually an LGBTQ ally, despite spending the last three and a half years rolling back gay rights.

“Why did he sign this hat and literally send it to my house?” Brokeback Patriot asks. “I think he does like me.”

Liberal LGBT says Trump doesn’t like me because I’m gay. If that’s true, why did he send me this? I think Trump does like me. He might actually like all LGBT Americans ? What a concept ?? pic.twitter.com/Ip0q9t7v93

the gay twitter mob can choke on my manly chest hair 😘💅🏻

How he was fired from his job for supporting Trump…

I got fired from my job and now I’ve been doxxed by the LGBT twitter mob. All for supporting President Trump and being outspoken about my political opinions online.

so CHOKE ON IT!

How the mainstream media is just a bunch of propaganda…

How Black Lives Matter is awful…

BLM is not beyond criticism.

It is not racist to criticize BLM.

How white privilege is a “racist lie”…

How masks don’t help stop the spread of coronavirus…

The Progressive LGBT community does not want Equality.

It wants Victimhood Status because it gives them 1.) an easy excuse for their failures and 2.) access to special privileges.

You’re not special because you’re gay. Being gay is not an achievement.

There are so many gays like me who support our President but they are afraid to speak out because of bullies in the LGBT. It’s sad really. We are supposed to be the community of tolerance. We should learn to be kind to others with different ideas & opinions. Isn’t that diversity? pic.twitter.com/HRd3m1EvXC

Seriously, nobody have sex with this guy. We forbid it.