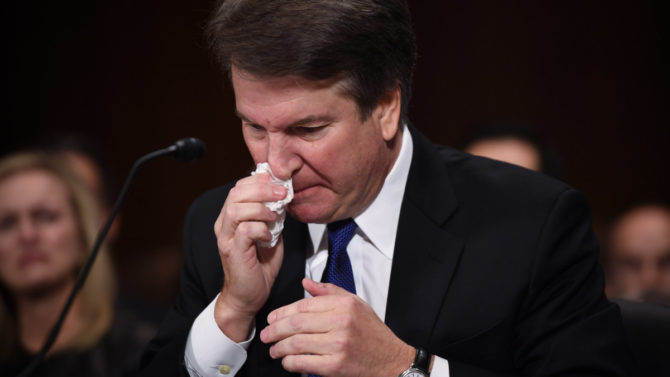 If you thought the drama surrounding Brett Kavanaugh’s 2018 confirmation hearing was over, think again. The FBI is now being accused “faking” its background check of the gay-hating, beer-loving Supreme Court Justice.

Sen. Sheldon Whitehouse is calling on newly-confirmed Attorney General Merrick Garland to help facilitate “proper oversight” by the Senate Judiciary Committee as it examines whether the FBI actually investigated the sexual assault claims made against Kavanaugh during his dramatic confirmation hearings.

Whitehouse just released the letter he sent to Garland implying that the FBI’s supposed investigation may have been “fake.”

“This was unique behavior in my experience,” the letter reads, “as the Bureau is usually amenable to information and evidence; but in this matter the shutters were closed, the drawbridge drawn up, and there was no point of entry by which members of the public or Congress could provide information to the FBI.”

Among the concerns outlined in Whitehouse’s letter are allegations that  witnesses who wanted to share information with the FBI couldn’t reach anyone to accept their testimony, perhaps because no one was actually assigned to collect and gather evidence.

On top of that, he claims the FBI created a bogus “tip line” and that senators weren’t given any information on how or whether new allegations were ever processed and evaluated.

“This ‘tip line’ appears to have operated more like a garbage chute, with everything that came down the chute consigned without review to the figurative dumpster.”

Now, Whitehouse wants answers about “how, why and at whose behest” the FBI conducted its “fake” investigation and whether any of the information collected in the “tip line” was even reviewed.

The FBI hasn’t issued any comment on the allegations, and it seems unlikely it will reopen an investigation into Kavanaugh, who ruled against LGBTQ equality last year. But the letter definitely puts pressure on Garland and the DOJ issue some sort of response.

This morning, Brett Kavanaugh was trending on Twitter. Here’s what people are saying…

Sen Whitehouse asked AG Garland to review whether the FBI background investigation into Brett Kavanaugh was “fake.” Good. They didn’t even interview all witnesses. So, of course it was fake.

If Brett Kavanaugh had sexually assaulted a woman in Benghazi maybe Republicans would have spent more than a week investigating it.

Based on today's news, I can only imagine the cry-face Brett Kavanaugh has right about now.

of course it's fake. it was done literally overnight, and deliberately avoided investigating new information from people who had information damaging to Kavanaugh. https://t.co/zQzDAqyzru

So when do the impeachment hearings start for sexual predator, Brett Kavanaugh?

As we speak, Karma is ringing Brett Kavanaugh's doorbell.

Reminder that Brett Kavanaugh acted this way at what was essentially his job interview, and still got the job. pic.twitter.com/Y0NRYNCCGI

Anyone else ready to see Brett Kavanaugh crying again?

Apparently Brett Kavanaugh is going to go through some things