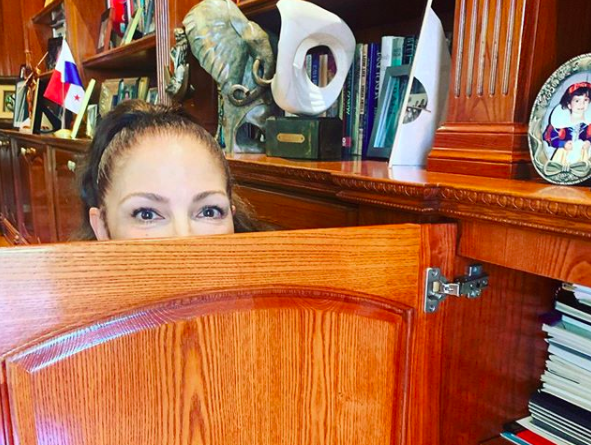 In addition to being a fearless LGBTQ ally and giving us tons of great music over the years, the singer’s Instagram page has been an absolute gift during these trying times.

Like many of us, the 62-year-old gay icon has been cooped up with her dogs in her Miami home, unable to see her kids or grandkid, for over a week and she’s clearly going a little stir crazy.

To pass the time, she’s been posting all sorts of photos and videos to Instagram in an effort to lift people’s spirits and lighten the mood.

“Even the birds were practicing social distancing today,” she observes.

Or this photo of her husband, Emilio, taking extra precautions while getting a manicure…

“There’s a fine line between caution and paranoia,” she writes.

At one point, Gloria promised to do a live stream of herself cleaning out the cupboards in her living room, but when the time came to record it, she couldn’t figure out how to work the camera.

Three hours later, she posted a video saying, “I’m trying to figure this out people! I’ll be there… pretty soon? I promise!”

That was on Tuesday. The live stream still hasn’t happened.

Another time, she shared a video of herself and her dogs jamming out to Christmas music to “beat the blues.”

Something to lift our spirits… ????????? Algo para levantarnos el ánimo…

Speaking of dogs, here’s a video of Gloria’s chihuahua, Lulu, standing (on the counter?) eating (off a dinner plate?) and then covering it up with a napkin when she’s finished.

“I don’t know why she does it,” Gloria says. “We have to put a napkin under her plate. That’s how she eats.”

And here’s a video she took of herself braving the local grocery store.

“Can this actually be happening, people?” Gloria asks. “This is just. Omigod.”

(Honestly, we’re genuinely shocked to learn that Gloria Estefan does her own grocery shopping. Who knew?!)

Of course, in times of great stress, its important to take time to pamper yourself.

Here’s a video Gloria looking refreshed after getting out of the shower, a place where she says she “thinks a lot.” In it, she offers words of encouragement to her followers.

“Together, I believe we create an unconscious reality, and I really believe that those create reality,” she says. “So let’s all concentrate on the reality we want, which is to get over this thing as fast as possible. And know that we’re all in the same boat, people. Let’s all row!”

In addition to making people feel good on Instagram, Gloria and her husband have also partnered with CVS Health to help find employees of their many restaurants temporary jobs until the bars and restaurants in Miami can reopen.