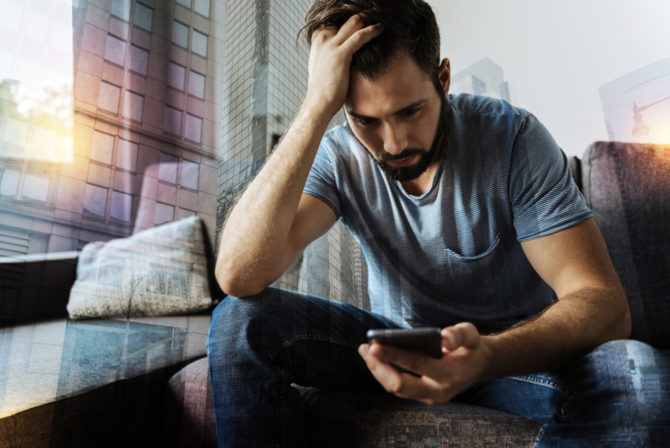 Jack Turban is a physician and medical writer at Harvard Medical School, where he researches gender and sexuality. In a new article published by Vox, he says he’s become increasingly “worried by the rise of the underground digital bathhouse.”

“Apps like Grindr, with 3 million daily active users, and others like Scruff and Jack’d, are designed to help gay men solicit sex, often anonymously, online,” he writes. “I am all for sexual liberation, but I can’t stop wondering if these apps also have a negative effect on gay men’s mental health.”

So he did a little research.

Turban created a profile identifying himself as a medical writer looking to speak with guys about hookup culture. He spoke to about 50 different guys.

“It’s a small sample size,” he admits, “but enough to give us some clues about how Grindr is affecting gay men. And it doesn’t look good.”

Pretty much everyone in there. #quitgrindr Photo by artist JCriscitello

Here’s what he learned…

Most guys said they liked the hookup app because it makes sex so accessible. With just the swipe of a finger, one can have access to hundreds, even thousands, of sexually available men.

The problem is, Turban says, that can get addicting.

Neuroscientists have shown that orgasm causes activation of pleasure areas of the brain like the ventral tegmental area while deactivating areas involved with self-control. And these patterns of activation in men are strikingly similar to what researchers see in the brain of individuals using heroin or cocaine. So when a neutral action (clicking on Grindr) is paired with a pleasurable response in the brain (orgasm), humans learn to do that action over and over again.

There’s also the issue of depression, and the fact that, according to numerous studies, gay people are much more likely to suffer from depression than straight people.

For some users I talked to, the allure of Grindr was not just the rush to feel good. It was to stop feeling bad. Users told me they log on when they feel sad, anxious, or lonely. Grindr can make those feelings go away. The attention and potential for sex distract from painful emotions.

Finally, Turban points to that recent study of 200,000 iPhone users that found that 77 percent of Grindr users felt regret after using the app. In fact, Grindr came in at #1 for the app that leaves people feeling most unhappy.

If the answer is "No", then why are you still there? #quitgrindr

The users I interviewed told me that when they closed their phones and reflected on the shallow conversations and sexually explicit pictures they sent, they felt more depressed, more anxious, and even more isolated. Some experience overwhelming guilt following a sexual encounter in which no words are spoken. After the orgasm, the partner may walk out the door with little more than a “thanks.”

“As we continue to fight to bring gay relationships into the mainstream, we need to keep an eye on Grindr and how it both reflects and affects gay culture,” Turban concludes. “The bathhouse is still around. It’s now open 24/7, accessible from your living room.”