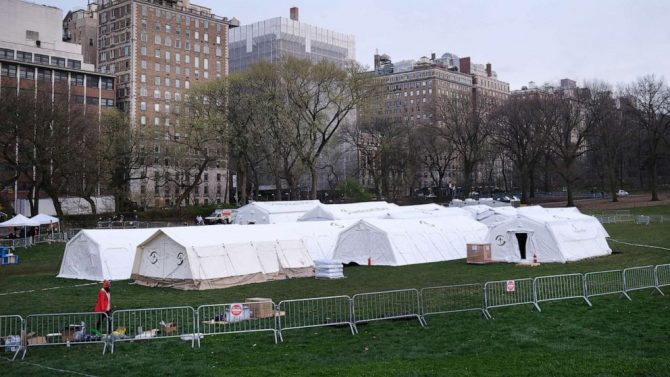 With New York City struggling to keep up with the outbreak of coronavirus, a new mobile hospital has opened in Central Park to treat overflow patients from Mt. Saini hospital. The catch: the tent hospital is operated by notorious homophobe Franklin Graham.

Graham, the son of televangelist Billy Graham, has a long history of anti-queer rhetoric and activities, including defending conversion therapy and personal attacks on former Presidential candidate Pete Buttigieg. Graham also helped propagate the false narrative that Barack Obama is a secret Muslim, and has praised Vladimir Putin for his homophobic policies.

New Yorkers learning that Graham’s organization, Samaritan’s Purse, will operate the overflow hospital has raised questions about whether the city should ever partner with such an organization, even in a time of crisis, and whether LGBTQ New Yorkers will be denied care.

“Our record on human rights is clear; and we are confident that the joint effort by Mt. Sinai and Samaritan’s Purse will save New Yorkers’ lives while adhering to the values we hold dear by providing care to anyone who needs it, regardless of background,” city spokesperson Jane Meyer told Gothamist.

Amy Martin, a Brooklyn-based former nurse, expressed her reservations despite Meyer’s reassurance. “I don’t want to demonize people who are volunteering their time, but it is a concerning thing,” she said. “On the one hand, this is absolutely an all hands on deck situation,” she continued. “On the other hand, as an LGBT New Yorker, I would be hesitant to make that my first choice of care. I’d much rather be seen anywhere else.”

In light of the connections between Samaritan’s Purse and Franklin Graham, New York State Senator Brad Hoylman called on Graham to reassure New Yorkers that the group would not discriminate against LGBTQ people in need. “COVID-19 doesn’t discriminate, and neither should Franklin Graham,” he said. “It’s unacceptable that a New Yorker infected with COVID-19 could be subjected to discriminatory treatment from an organization whose leader calls us ‘immoral’ and ‘detestable.’”

Franklin Graham and Samaritan’s Purse have yet to answer Hoylman’s request.