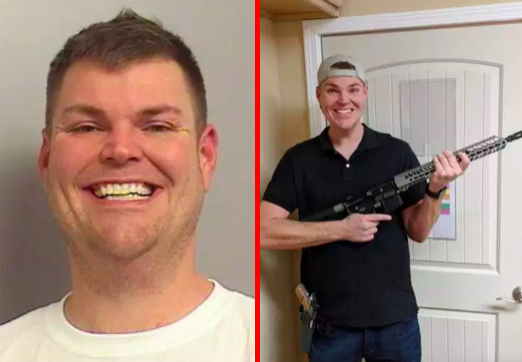 A former GOP candidate for Governor of Oklahoma has been slapped with two felonies after shooting a process server last week.

36-year-old Christopher Barnett made a bit of history last year when he ran to be his state’s first openly gay governor. He ultimately finished eighth in a 10-person field, receiving just 5,240 votes for the GOP gubernatorial nomination

But it’s doubtful that’s what he’ll be remembered for.

Last week, Barnett was arrested when he shot at a man who was delivering an eviction notice to his home. The attack was caught on CCTV.

But Barnett and his husband, Trey, claim the footage has been doctored. They say the process server attempted to lure them outside and that he had a gun hidden under his shirt, which caused them to fear for their lives.

“They somehow digitally made things happen that didn’t happen?” Assistant District Attorney Mark Collier asked in court, to which Trey Barnett replied, “I mean, it’s pretty easy to do nowadays.”

Police say that Barnett, who recently announced his plans to challenge Jim Inhofe for his U.S. Senate seat, admitted to Googling “Can you legally shoot a process server?” prior to the shooting and that, at one point, joked that that “the only good process server is a dead one” during his affidavit.

They also say Barnett has a long history of making threatening statements on social media, including bragging about his collection of 10 firearms and fantasizing about how he would commit a mass shooting at a local university.

In one post, Barnett wrote: “Wait for football season to come, start getting every single AR-15 put into place on the highest floor. Rig up a system that will fire all of the guns at once. … Wait until almost half time or when everyone is leaving the game. When people start to flood the gates to leave, the automatic system built starts firing.”

During his 2018 run for Governor, a post appeared on Barnett’s campaign’s Facebook page that read, “As the next mayor of Oklahoma, I’m going to enact a mandatory nationwide lottery that euthanizes 1 out of every 100 people in the world.”

He later claimed trolls had hacked into the account.

A preliminary hearing is scheduled for August 26. He is currently being held without bond until then.