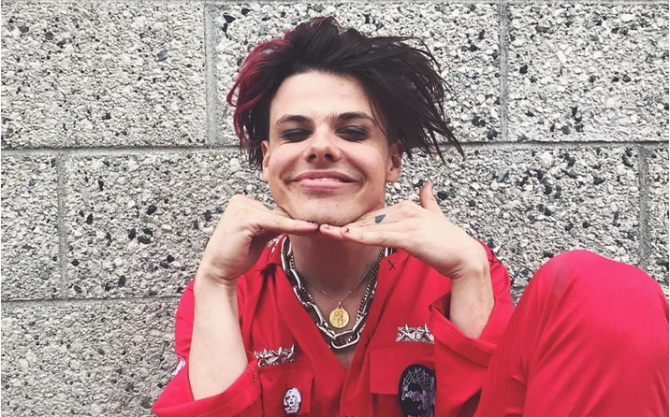 Dominic “Yungblud” Harrison became Instagram official with openly bisexual pop star Halsey in January, and now the South Yorkshire lad says he too is “very fluid” with his sexuality.

“I am more straight,” he tells Attitude magazine. “[But If] I walked down the street and met a f*cking bloke tomorrow, or a trans person, you never know. … It’s about connection. I’m very fluid about it.”

Yungblud, a singer himself, said he moved to London from the town of Doncaster “to be liberated, to be able to paint my nails, to f*cking try sex with a guy, to try everything, to fulfill my fantasies and figure out who I am.”

He’s also fluid with his gender expression, toggling between traditionally male and traditionally female clothing. “We’ve been brought up with such boundaries: woman wears dress, man sees woman’s curves, you can make baby,” he says. “Western civilization put women in dresses and men in trousers. Before that, in medieval times, every f*cker wore a dress.”

“I wake up one day and want to look girly as f*ck, and I’ll wake up the next and walk out of the house in a Fred Perry polo shirt looking like I’ll beat the sh*t of out you. I’ll be Anita from West Side Story then suddenly transform into Liam Gallagher.”

For her part, Halsey has often championed bisexual visibility, even defending herself against those who try to point to her heterosexual relationships as proof that she’s not queer.

“I posted on my Instagram for National Coming Out Day that I’m out and proud, and everyone’s commenting like, ‘But aren’t you dating G-Eazy?’” she wrote on Instagram in 2018. “So I wanted to take a moment to make a PSA to remind you that — bisexual people. We exist.”

Related: Beyond Madonna: 12 queer musicians who are about to blow up

And in her 2018 GLAAD Media Award acceptance speech, she said, “I’m a young bisexual woman, and I’ve spent a large part of my life trying to validate myself — to my friends, to my family, to myself — trying to prove that who I love and how I feel is not a phase. It’s not part of some confusion that’s going to change or could be manipulated.”