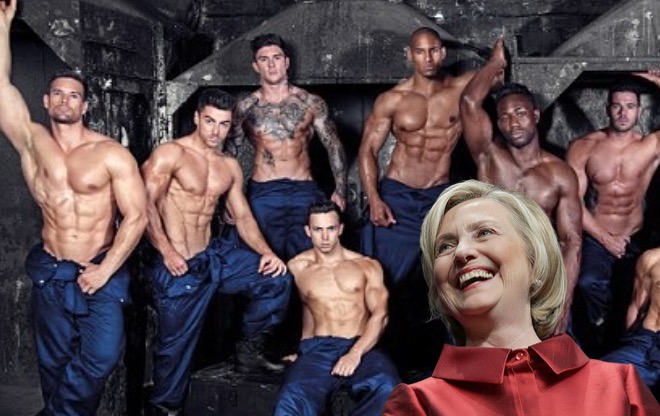 So many things went wrong on election day, it’d be impossible to tally them all.

But if you were to somehow rank all the missteps, mistakes and missed opportunities from the fateful night of November the 8th and rank them by importance, somewhere very, very far down the list would be five unnamed musclebound men.

And unlike most of the wrong turns that night, this one can be undone.

Stephen Colbert hosted an election night special on Showtime, and the show took a decidedly hellish direction when the results of the contest became clear.

One of the gags he and his team had to abandon after Trump’s victory solidified involved a gaggle of naked dudes. Hey, it was Showtime after all.

Colbert, not one to let a joke go to waste, decided to present the bit to Hillary during her appearance on The Late Show Tuesday night.

It’s safe to say she was into it:

THE GIFT: Stephen hands @HillaryClinton a dossier of unused 'Clinton victory' jokes from Election Night, with one very cheeky photo inside. pic.twitter.com/44CahJa83a

The interview wasn’t all jokes, though.

Clinton talked everything from the difficulties of writing her new book:

“It wasn’t easy. It was painful. It was horrible, reliving it. And, you know, being as candid, open as I could be about the mistakes I made, and talking about those. But also trying to come to grips, as I write in the book, about everything from sexism and misogyny to voter suppression to the unusual behavior of the former Director of the FBI, and the Russians. And the Russians.”

To her thoughts on Trump’s frightening recent address to the United Nations:

You can watch the entire appearance below: