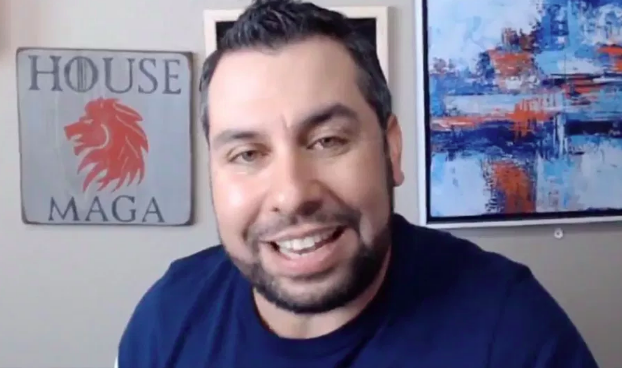 Because he’s never seen the out lawmaker perform oral sex on a man.

Dilley recently posted a 50-minute video to his YouTube channel claiming Sims (who he refers to as “that c*cksucker from Pennsylvania”) is secretly straight and that he’s only pretending to be gay for political gain.

Because everyone knows the best way to court votes in a state that went for Trump in 2016 is be anything other than a straight, white, cisgender dude with a wife and two kids.

“This dude’s not f*cking gay,” Dilley proclaims. “Sims doesn’t like the d*ck.”

“Sims pretends to be gay because it provides coverage of his behavior, because he knows anyone who goes against him will be labeled a bigot,” Dilley continues.

“I don’t think he’s gay and I think we need to prove it. … We should f*cking demand we see him suck a d*ck before we’ll believe he’s gay. You’re not gay, dude. Suck a d*ck! I don’t believe you, I think you’re just pretending to do it!”

There’s nothing quite like a homophobe asking to watch a guy perform oral sex on another guy, is there?

MAGA activist Brenden Dilley insists that Pennsylvania state Rep. Brian Sims is not really gay and challenges him to "suck a dick" to prove otherwise. pic.twitter.com/qq6YLhAaJA