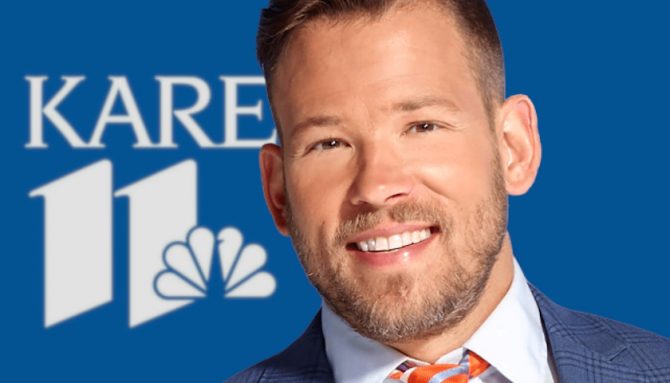 Sven Sundgaard is a beloved weatherman and gay vlogger from Minneapolis. Or at least he was until last week when he was abruptly fired from his job at KARE-11 for calling out a gang of angry, far-right, anti-lockdown protesters on Facebook.

39-year-old Sundgaard, who is one of highest profile LGBTQ people in the Twin Cities, was let go from his job of 14 years after he shared a post on Facebook from Michael Adam Latz, a rabbi from Minneapolis, who called the protesters “white nationalist Nazi sympathizer gun fetishist miscreants.”

The dissidents had congregated outside Democratic Gov. Tim Walz’s residence on April 17 at the urging of Donald Trump, who tweeted to “Liberate Minnesota” earlier in the day.

One protester in particular carried a large sign with an image of Gov. Walz wearing Hitler mustache and the word “Fuhrer” written over his head.

Guy waving the Christian, American, and a Trump flag in front on the Capitol while holding a rifle. @MPRnews pic.twitter.com/aGT9v4q9nl

Sundgaard shared Latz’s post but deleted it a short while later. But not before a group of right-wing activists saw it and, of course, demanded he be fired from his job.

Then last Friday, KARE-TV announced it was bending to the anti-lockdown protestors demands and letting its beloved weatherman go “due to continued violations of KARE11’s news ethics and other policies.”

“Due to continued violations of KARE11’s news ethics and other policies, we have made the decision to part ways with Sven Sundgaard,” the station said in a statement. “We hope you continue to turn to KARE 11 for your news, traffic, weather and more.”

Due to continued violations of KARE11’s news ethics and other policies, we have made the decision to part ways with Sven…

Unfortunately for the network, its decision to abandon one of its most beloved personalities and a faithful employee of 14 years has not gone over well with many of its viewers.

“I am on the side of science and Sven,” one person commented. “Due to the poor ethics of KARE 11, I have decided to part ways with KARE 11.”

“Sven was part of the reason I watched Kare11,” another said, “so I’ll just choose another network for my news.”

“Sad that a weatherman is held to a higher standard than our current president,” a third person wrote.

On Tuesday, Sundgaard made his first public remarks since his dismissal.

“Hello everyone, I see you, I hear you, I love you all!” he wrote in a Facebook post. “I first want to thank those who have supported and followed me throughout my time at KARE 11. And, I am especially grateful to those who have sent supportive and kind messages over the last several days.”

He went on to say that he “disagrees” with why he was fired and is “considering my options at this time.”

Hello everyone, I see you, I hear you, I love you all! I first want to thank those who have supported and followed me…

We’re definitely going to continue following this story and will keep you abreast with any updates. In the meantime, here are some pics from Sven’s Instagram page to tide you over…

No more monkeying around! ? back to reality & work… see ya in the morning! #ExploreWithSven photo: @robbyourealtor

?In a giant boot! But why? Find out coming up on @kare11 #MNStateFair #KAREatTheFair ?

#throwbackthursday to the #Galapagos ! Heading back in a week: can’t wait! #ExploreWithSven

MORE in my stories ?: Visited an #elephant #sanctuary in #Zimbabwe & decided to jump off the #Victoria #Falls (one of the natural wonders of the world!) – my scream & view is EPIC. How I held onto the #GoPro I don't know… This was our last full day in #Africa. There will still be more to come as we put video together- some incredible stuff! #ClimateChange #ExploreWithSven #BortonOverseas @bortonoverseas

#tbt #throwbackthursday to running in #TelAviv #Israel on the #mediterranean : would be nice to have some sun ?? & heat !! #explorewithsven

#ThrowBackThursday to my first visit to #Africa : felt like you were in an isolated place but these days you realize isolation isn't about a place, it's about a mindset and how you live, or have to live. #TBT

Accidental #gym #selfie ?? must be a Monday !! #igfitfam #muscle #gaymuscule

#FBF #flashbackfriday to the #deadsea #israel & 100° this cold, wet Friday…