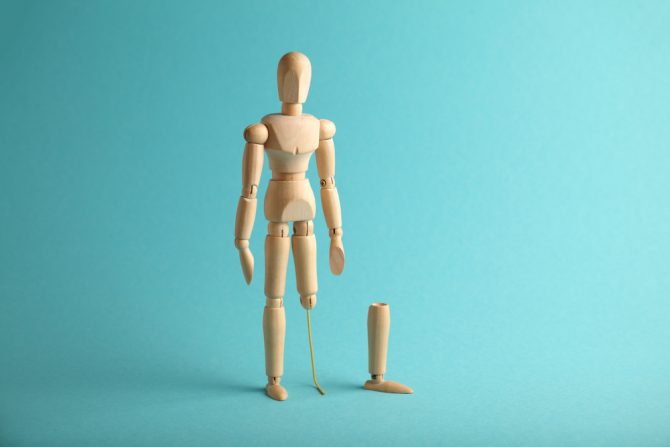 I was around the age of 21 when I received it.

“Hey, I just read an article of yours about being gay and disabled,” the message, from a complete stranger on Facebook, read. “I’ve always been attracted to guys with, uhm, obstacles.”

Attracted to obstacles? WTF! I thought. Of course, I was young at the time. And having just started having sex (I was a late bloomer, years of internalized homophobia will do that to a person), I didn’t know what to think. Who was this person, and what did he mean, he was ‘attracted to obstacles???’ It seemed too weird. Too freaky. I didn’t understand it.

But being the (albeit judgmental) gentleman I was, I responded with a polite thank you… and then I promptly blocked the guy, hoping never to hear from him again.

Years later (almost eight to be exact, I’m basically a daddy now), I still find myself thinking about this interaction. Could I have handled it better? Was he actually weird for being “attracted to guys with obstacles,” or was I the problem?

People had asked me before if I had ever felt fetishized because of my disability, and I had heard of it happening to others, but did that message count as being fetishized? And even if it was, was that actually a bad thing?

I sought to find out, so I enlisted the help of a few sex experts (as one does). According to everyone I talked to, the fetishization of people who are disabled is very much a thing. It even has a name: abasiophilia.

Abasiophilia, according to Eric Garrison, a queer clinical and forensic sexologist, is the attraction to somebody’s inability to walk. This immobility is the result of an injury, a genetic trait, amputation, acting, or even alcohol/substances. The “turn on,” Garrison says, can come from the outward appearance of a disability, the feelings (literal and figurative) surrounding it, or even the lived experience of it.

In other, more simple terms, those with this fetish may be attracted to people who use a wheelchair, crutches, or have their legs in casts or braces.

And if you think abasiophilia is a product of the age of Grindr, think again. According to experts, it’s relatively old as far as sexual attractions go – the term was coined in 1990 by US sexologist, Professor John Money. In fact, cases of abasiophilia have been popping up in papers by doctors since at least 1960.

No matter its medical validity, there seems to be a massive debate about whether abasiophilia is considered a fetish or attraction, says Sophie McGrath, who identifies as queer, and is the Head of Customer Satisfaction at online retailer, Adult Toy Mega Store.

“Fetishes generally focus on a particular thing or object, like a wheelchair,” says McGrath. “But if you’re turned on by the person in the wheelchair, that’s a sexual attraction, not a fetish. For example, a surgical mask fetish would be different to being turned on by someone who has medical issues.”

During her time working in the adult industry, Sophie has met many people with abasiophilia, also known as “abasiophiliacs.” She says many of them are misunderstood by the general public, in that many believe that the person doing the fetishizing is somehow harming others.

“Many of the abasiophiliacs who buy from us state that they are not harming others,” she says. “Abasiophiliacs have told us when buying products from our retailer that they have ‘ordinary’ relationships with their disabled partners and they are healthy, respectful and consensual.”

Garrison, meanwhile, points out that many disabled people are fine with being fetishized, contrary to popular belief.

“I have spoken with many people who have learned later on in a romantic or sexual relationship that they were being pursued solely for their immobility issue, and said point blank, ‘I’m okay with that’ or even ‘It pays my light bill and puts food on the table, so who cares?’,” he says.

That is not to say abasophilia is never problematic, says Garrison. Abasiophilia can become unhealthy if one partner is pressuring the other to do things or act a certain way. It can also become an issue if a person allows their fetish to consume them to the point that they stop paying bills or going to work in an effort to “feed their fetish,” he says.

There is also the issue of objectification, according to McGrath.

“Fetishes like abasiophilia can objectify and dehumanize members of the actual disabled community who struggle with access and inclusion in a society that often isn’t kind to people with disabilities,” she says. “If a person’s only contribution to supporting the disabled community is to sexualize them, their fetish or sexual attraction is harmful.”

So what is one to do if they think they may be an abasiophiliac? Embrace it, as long as no boundaries are being crossed. That includes letting go of any shame one may have, says Dr. Michael J. Salas, an openly gay sex therapist in the Dallas area.

“There is so much shame in our culture that I have worked with some who think that they won’t ever be accepted,” he says.

“Medical role play is a great way to start,” she says. “Dressing up as the doctor or patient can help you and your sexual partner work out what you do or don’t like.” This includes playing around with medical-specific sex toys, such as neck brace collars or speculums, she says.

Whatever you do, whether it is a disability fetish, foot fetish, or something in between, don’t knock it ‘til you try it, says Salas.

“People often think that fetishes represent internal damage,” he says. “However, desires vary a lot, and there is evidence that most people have some form of desire that could be considered a fetish.”

Message received… if only I would have gotten it years ago.