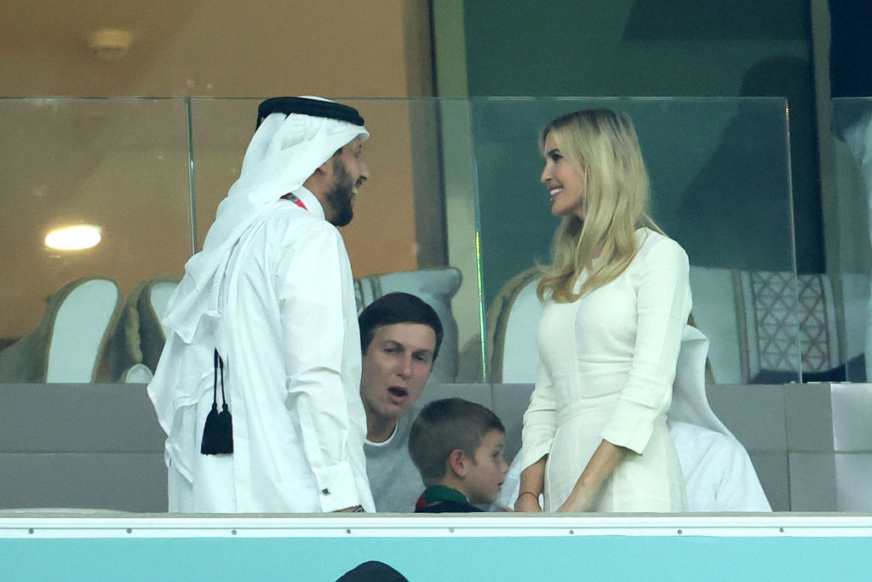 While families across the country gathered around their tables last week to celebrate the Thanksgiving holiday, an American tradition since 1863, Ivanka Trump and her family jetted off to Qatar, where they rubbed elbows with homophobes and anti-Semites at the World Cup.

On Friday, the former first daughter shared several pictures of her family at the games. “Go Team USA!” she tweeted, along with an American flag emoji.

The hypocrisy of the tweet is right on brand for Ivanka, as she claims to be an advocate for freedom while simultaneously vacationing with her family in a country known for committing human rights violations and then not using her platform to speak out against such offenses.

Homosexual acts are punishable by imprisonment and death in Qatar, where Islam is the state religion. And human rights activists say anti-LGBTQ harassment by government officials often goes unchecked.

While the country’s officials and World Cup CEO Nasser Al Khater both guaranteed the safety of LGBTQ visitors and fans who display rainbow flags at this year’s games, police and stadium officials have reportedly been confiscating rainbow swag from fans.

Meanwhile, FIFA, the international body governing professional soccer, said it will issue severe penalties against any teams whose members display rainbow armbands on the field.

If Qatar’s open hostility towards LGBTQ people isn’t enough to give Ivanka pause, you’d think its stance on Judaism might be, considering that she, her husband, and their three children are all Jewish.

Israel negotiated a special diplomatic agreement with Qatar to allow direct flights between the countries during the World Cup. (Normally, Israelis are forbidden from traveling to the Gulf State.) But the Israeli government is reportedly urging citizens attending the games to “tone down their Israeliness” to avoid harassment, and there are conflicting reports that the Qatari government has banned public displays of Jewish prayer and kosher food.

They were promised to be able to cook kosher food including kosher meat, but at the moment have only been allowed to sell cold bagel sandwiches.

Jewish officials say before the World Cup began they were also promised by authorities that observant Jews would be allowed to pray at venues.

“We were promised to be allowed to create prayer spaces in order for religious Jews who came to see the games to have a place of worship,” one source told the Jerusalem Post.

Officials now say that they are no longer allowed to pray due to “security reasons.”

Of course, when you pocketed $640 million while working in the White House and your husband received $2 billion from the Saudis for some still unknown reason, it’s easy a turn a blind eye to all that, which is what Ivanka appears to have done over the holiday weekend. Surprised? Us neither. Complicity has always come easily to her.

Got to keep that Saudi money coming right? https://t.co/AOQLxEBB30

Wonder what else you could be in Qatar for? 🧐💵💰🤝

Just a regular American having a normal Thanksgiving.

You’re not fooling anyone, Ivanka.

Shouldn’t you guys be rooting for your employer, Saudi Arabia?

You’re more team Saudi Arabia and we know why.