Our interview with Johnnie Ingram and Steve Warren begins with a promising admission: “We love Queerty! We read it all the time.”

We could have done worse. The longtime couple will unleash a dragstravaganza into the world this April 23 with the release of We’re Here on HBO. It also marks the debut television series from Ingram and Warren.

We’re Here follows RuPaul’s Drag Race favorites Eureka, Bob the Drag Queen, and Shangela as the three tour Middle-American cities in the country bringing their drag fabulousness to the masses. Each episode finds the three in a new town looking to put on a show…and drafting a few locals to take part in it as well. The show focuses on the personal stories of their drag protegees, and how performance can help heal personal wounds, bring the queer underground into the open, and unite the LGBTQ and straight communities in friendship.

Queerty scored some time with Warren & Ingram just ahead of the series debut to talk about the queens, the locals and the unlikely story of the couple’s Hollywood dream come true. We’re Here premieres on HBO April 23.

So this is the first show for both of you. How did the two of you get hooked up?

Steve Warren: We’ve been coupled up. We met three years ago through a friend. It was love at first sight. Then, for this, we both have a passion for art and politics. We’re very socially conscious. We want the world to get better. We’ve grown so frustrated with people just talking past one another, ourselves included. We feel like there’s no ability to connect anymore with anyone except people you agree with. So Johnnie and I are huge fans of RuPaul’s Drag Race. We were watching, and all of a sudden the thought came to our heads: why don’t we take drag to small, conservative towns in the most fabulous way possible. So we constructed the whole show, and we were elated. We knew it would be great, that it would be something special.

SW: A week after that happened, I had a lunch scheduled with Casey Bloys, the head of HBO. It was just a friend-business lunch. And I said “Johnnie and I just came up with this idea…” And he said, “I want it.” He said there was a woman in New York that he knew who’d wanted to do something like this for years. And then it happened. So, that was it.

SW: There was no going back. We had the title. It came to us like a bolt of lightning. It was the perfect title for what we were trying to accomplish: giving voice to someone that doesn’t feel seen. I came of age in the 80s, during the AIDS crisis. “We’re Here” is so important to me from ACT UP. It’s part of what I grew up with.

So why Bob, Shangela & Eureka then?

Johnnie Ingram: We honestly didn’t have anyone else on our list. We were looking for, most importantly, queens at the top of their game. All three of these queens are the best of the best, but then on top of that, have this empathy for others. They’re also all from small towns, so they can relate to the communities we go into. I’m also from a small town in Eastern Tennessee and grew up in conservative America. I know it’s important to be able to relate to people, and no go in with the attitude of we’re too cool. Drag, in a way, is an olive branch to conservative America. It has not only an entertaining quality, which these queens have in spades. But they also have this ability to just sit down and have a non-judgmental conversation. That’s incredibly important. We sat down with all three over lunch, and we knew right away these were our three. And they were super excited for the opportunity.

JI: Everyone on our crew, the three queens, we’ve become this beautiful family. I worked through college at a drag bar in Chicago and I had such a good time. What I noticed is that drag is kind of like a Dolly Parton or Cher concert: everyone shows up. Grandmas, bikers, it’s this mix and match of people who are interested in this important performance art. I find it incredibly interesting that drag queens are now artists. And this is a different way for them to use their art for good.

That’s great to hear. So I’ve seen the first three episodes. How did you go about casting the show? Normally that’s not something I would ask, but with this series, the locals you feature are so specific in terms of their personal journeys. How did you find them?

JI: We have a showrunner that had casting people that we hired. We knew the type of towns we wanted to portray. So we needed to cast the towns, then find people who had compelling stories to tell. So the casting people would search the internet for interesting stories. For example, there’s this group called “Mamma Dragons” in Twin Falls, Idaho. They’re a group of women that support kids who are Mormon and get kicked out of their families.

JI: So that was a group that casting found. Then we approached them, and they gave us ideas of people in the town. Every town we’d find some entre like that. And it went from there. So we had a bunch of towns to pick from, and a whole bunch of people, and we’d mix and match the people to the drag artists.

Related: Shangela, Bob the Drag Queen and Eureka O’Hara get their own TV show

SW: It’s complicated because the contestants do need to perform in front of the townspeople, and there’s a lot on the line in terms of the local perspective. It definitely was challenging, and uncharted territory because nobody had seen the show. We had a lot of people who, at the last minute, didn’t want to do it.

Did you guys ever fear for your safety?

JI: What’s really interesting is that in the beginning, we weren’t sure what to expect. But once we’d get there, you know there are undercurrents of anger. In Gettysburg, there was this car that kept driving through town screaming “Trump!”

JI: Generally, people were respectful though. I think a lot of it is that people gossip behind each other’s backs. There are lots of online groups where people voice their opinion behind the keyboard. And in a small town, people are often forced to push down their sexuality or individuality and not able to talk about it openly for fear of gossip. When we come to town, it ignites all that. People start talking, and a lot of that tension is released. People do have conversations that have been tucked away for a long time.

SW: Is there one character that you really connected with?

I have to say, two stories really moved me in the show: those of Tanner and Erica. They are two people with a lot of pain, and in a sense, they confront that with their performances. Prepping for this interview, I really thought about why. I think there are two reasons: one is that I have had to reconcile my faith with my sexuality like Tanner. I also grew up in a small town. And I’ve known a lot of women like Erica who have ridiculed their families and regretted it later.

SW: I mean, I shared this with my mother, who still lives in a very, very small town in Tennessee. She was crying and said “I’m so sorry. I did that to you.” She told me I was going to Hell when I came out. I think she felt bad, but she’s come a long way. And it happens a lot.

That’s beautiful to hear. In many ways, this is a show about confrontation. And I don’t mean that in a combative, adversarial kind of way.

It’s about confronting yourself, or your past and self-examination. I think the reason Tanner and Erica’s stories touched me so much is that they confront in their performances are their pain and shame. They are people with a lot they carry around.

JI: I love what you say about confrontation. It’s not antagonism, but confronting your own beliefs.

Your past. Sure. So then here’s the big question: what did each of you confront?

SW: I think that the most obvious thing is masculinity versus femininity. I think that a lot of queer people these days ask what is masculine versus feminine. Why is one preferred over the other? Should that be the case? I think the biggest thing here is that a lot of people, including myself, try to pass as masculine. Not that I put on a front, but you do it to avoid confrontation. The ability to pass is hiding in away from who you are. In this case, watching and celebrating the obvious gender fluidity and playfulness, and how lines are blurred in performances with these queens is very moving and very releasing. It allows you to rethink yourself.

JI: For me, one of the revelations is just how we’re all connected. We’re all the same. The people that we touch—every single one of them—I had enormous compassion for. I feel, in a sense, a little fatherly to so many of these people. Erica is everybody. I see the pain, the joy, how they can transform in a short period of time, and be awakened to the possibilities of what can be. I cried at every single [performance]. It’s amazing.

SW: And experiencing counterculture in its modern form. You know, these queens are celebrities. They bring a village. It’s very freeing and emotional for everybody.

What surprised you the most about the gay communities you encountered in your travels?

JI: And a lot of these towns are struggling with their own identity with their older conservative group and younger progressive group. What I think is so surprising is the lineup out the door to come to these events, and how incredible it is to see these people come together. Everyone comes out.

SW: I’m always amazed. I’d say “Johnnie, come out!” We’d be getting ready, and the line would be blocks long. Drag queens show up. It’s like a party in the line. People are just so happy to be part of it. It astounds me. There was one woman in Twin Falls—I couldn’t believe it—she pulled up a lawn chair and sat outside the theatre for six hours to make sure that she would get in. 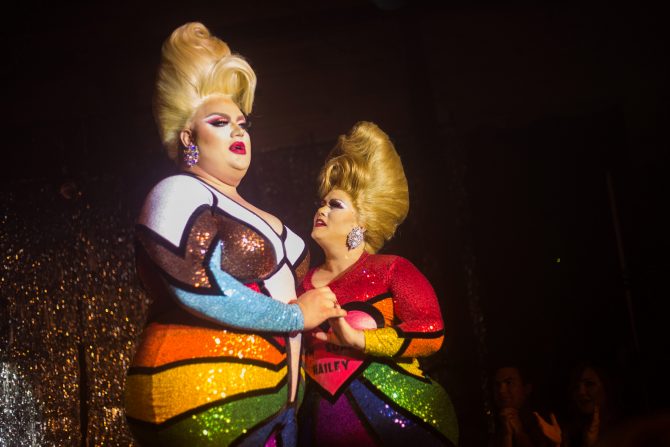 JI: They all come up to us to say how grateful they are, and how much they need this. It shows the importance of queer communities everywhere, and how we need to be there. We can add value to community. Even a local drag show brings people together in such a beautiful way. Hopefully, we leave them with a spark to ignite that on their own.

That’s wonderful. What’s next for you? Do we know about Season 2?

SW: We hope there will be many more seasons.

JI: Yeah. We’re hoping for Season 2. It feels good; we’ve been lucky to see the whole season, and we’re excited about what’s coming up.