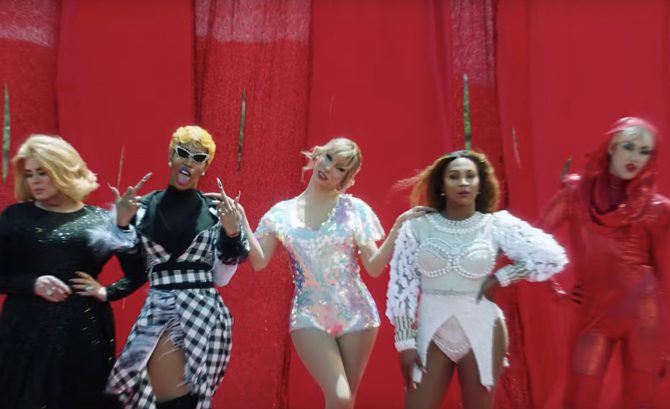 Before launching into superstardom, RuPaul made a quick cameo in the music video for B-52’s camp classic “Love Shack.”

Thirty years later, a number of her most famous protégées have starred in music videos with some of the biggest names in music – Taylor Swift, Rihanna, Dolly Parton – and yes, Eminem – are just a few music icons who dazzled viewers with the magic of drag.

While we wait for Madonna to join the ranks (All Stars 4 co-champ Monét X Change is set to appear in the Queen of Pop’s video for “I Rise”), here are twelve music videos with guest appearances from our favorite RuPaul’s Drag Race stars.

Taylor Swift gathered all the gays (the Queer Eye studs, Adam Lambert, Laverne Cox, Billy Porter, and Ellen DeGeneres all made cameos) for her super-queer, super-cute video for “You Need To Calm Down.” One of the clip’s most memorable scenes features drag stars impersonating the reigning queens of pop: Tatianna as Ariana Grande, Trinity the Tuck as Lady Gaga, Delta Work as Adele, Trinity K. Bonet at Cardi B, Jade Jolie as Taylor Swift, Riley Knoxx as Beyoncé, Adore Delano as Katy Perry and A’keria C. Davenport as Nicki Minaj. Mama Ru even makes a quick appearance sans drag. The video ends with a call to action. with Swift urging fans to sign a petition for Senate support of the Equality Act.

The “Fancy” hitmaker delivered a one-two punch of drag-tastic music videos. In March, she dropped a morbid clip for “Sally Walker,” which featured guest appearances from Shea Couleé, Mayhem Miller and Vanessa Vanjie Mateo. She followed it up with the sugar daddy-inspired “Started” video, which again saw Miss Vanjie, as well as All Stars 3 winner Trixie Mattel.

After Ginger Minj appeared in Netflix’s Dumplin’ – a film brimming with tunes from Dolly Parton’s catalogue – the country icon released a video for a dance remix of her 1974 classic “Jolene.” The campy clip features Minj, as well as some of her famous drag sisters: Alaska, Manila Luzon, Katya, BenDeLaCreme and BeBe Zahara Benet were all invited to the hoedown.

It’s a blink-and-you-miss it moment, but Willam, Detox and Morgan McMichaels kiki in the background of Rihanna’s candy-colored “S&M” music video.

Pop divas aren’t the only ones embracing the art of drag: Manila Luzon and Los Angeles-based drag sensations Anita Procedure and Cake Moss share some screen time in the the video for rock group Kings of Leon’s “Around the World” music video.

Group member Jade Thirlwall has not been quiet about her appreciation of drag culture: she even clapped back at a fan who disagreed with her choice of RuPaul as her #WCW (an abbreviation for “woman crush Wednesday”) on Instagram. It’s no surprise, then, that the Little Mixer gathered a girl gang of Courtney Act, Alaska and Willam for the group’s Stormzy-assisted “Power” music video.

The out-and-proud country hunk has been challenging the traditionally homophobic genre and, as such, enlisted self-described “elephant queen” Eureka O’Hara to play his love interest in “For You.”

Drag Race’s OG bald beauty Ongina can be spotted among the partygoers in Fergie and Co.’s inescapable 2009 hit, “I Gotta Feeling.”

Stateside fans may not be familiar with Gloria Trevi, but she’s a massive gay icon in Latin countries. The singer tapped Drag Race fan favorite Valentina (both in and out of drag) for a steamy love affair in her clip for “Yo Soy Su Vida (I Am His Life).”

Season two runner-up Raven doesn’t just make a quick cameo in the video for synth-pop goddess MNDR’s “Feed Me Diamonds”: she’s the clip’s star. The music video documents the drag queen preparing for a show and stunning a crowd in a gold, gypsy-inspired outfit.

Given Slim Shady’s turbulent relationship with the LGBTQ community, it’s shocking that even he has had a Ru girl in one of his music video. Prior to her stint on the show, Derrick Barry cameoed in Em’s “We Made You” doing what she does best: impersonating Britney Spears.

Related:Don’t be surprised if these 10 queens make it to ‘RuPaul’s Drag Race All Stars’ season 5