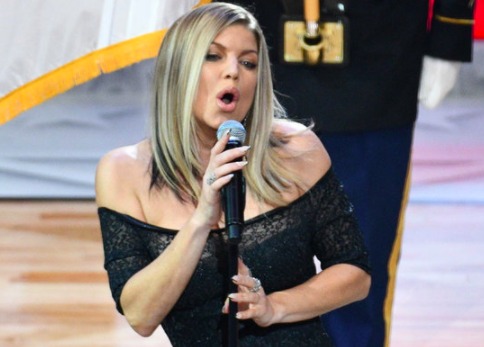 You’ve no doubt heard by now that Fergie gave a well-intentioned but chilling rendition of the National Anthem before the NBA All-Star Game in Los Angeles on Sunday.

Pretty much everyone, including Fergie herself, agreed that the performance was, well, awful.

The singer was quick to issue a formal apology for her performance.

“I’ve always been honored and proud to perform the national anthem and last night I wanted to try something special for the NBA,” she said in a statement. “I’m a risk taker artistically, but clearly this rendition didn’t strike the intended tone. I love this country and honestly tried my best.”

We were immediately reminded of another rousing rendition:

Unfortunately, not everyone was so quick to accept her apology…

First, there were the tweets…

Let's be real, #Fergie gave the U.S. the anthem it deserves right now.

I mean you see who the president is, right? pic.twitter.com/Lbkymqd1co

Who saw Fergie's national anthem performance at the NBA All Star Game? I think mine was better lowkey

Seriously. What the fuck do you expect out of Fergie?

Fergie’s performance of the National Anthem is like the musical equivalent to The Room. Simultaneously the worst and best thing you’ll ever see, with a lot of awkward and unnecessary sexual tension.

#Fergie or Carl Lewis!?! Still a toss up… #uhoh #merica @fox59 #whiteboard Honestly both can sing better than me…

I'm gonna need you guys to chill with these #Fergie memes ahkay ?

#fergie apologizes about her performance of the National Anthem. #JayZ spend over $91,000 on his friends birthday. Find out more with @dedeinthemorning HOT TOPICS at 7:50! #dedeinthemorning #keepiton #k104

Some people were slightly more sympathetic towards the singer…

My goals in life is to be as confident as Fergie singing the national anthem.

Finally listened to @Fergie's rendition of the National Anthem. Wow, folks have really overreacted. It wasn't *that* bad. And she shouldn't say sorry. An artist should never apologize for his/her unique angle on something. (No, I am not a Fergie fan.)

Here’s the thing. While Fergie’s anthem rendition fell flat, I give her enormous credit for owning it & saying she tried her best. No excuses or lashing out at the millions of critics who couldn’t sing 1 word of that song in key. Give her a freaking break. She won me over today.

wait, why did she have to apologize? who fucking cares? Donald Trump takes a metaphorical shit on the flag every day of his presidency but Fergie had to *apologize*? i hate everything. https://t.co/lhIZnM2Gui