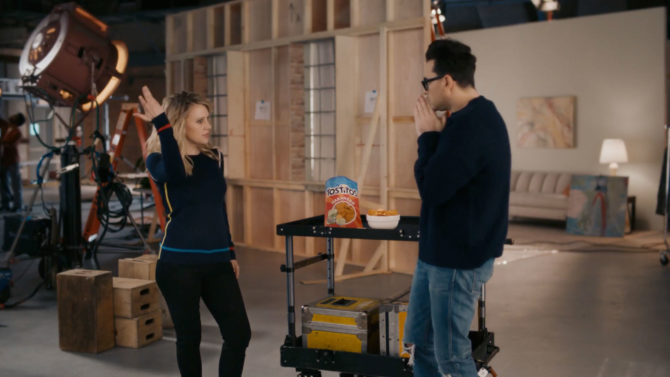 Openly gay comics Kate McKinnon and Dan Levy have become the new spokespeople for Tostito’s new Habanero chips, and if said snack is as fun as this new commercial, we’re hooked.

The ad for the chips finds Levy & McKinnon engaging in a “spice-off,” a sort of passive-aggressive contest to see who is spicier. After snacking on the chips off-set together, they begin trying to best describe the flavor.

Related: So Billy Eichner just proposed to Dan Levy…to piss off the Pope

“For me, the spice is pelvicular,” Levy says at one point, rolling his hips.

“For me, I think it’s … it’s drama,” McKinnon replies with theatrical flourish. “It’s, ‘Victor, I’m leaving!’ That sort of level of spicy.”

It goes on from there. Levy whips out an unseen picture on his phone, causing McKinnon to gasp.

“That is spicy,” she admits. We have to wonder what Levy showed her–is it of him, or someone else?

The ad climaxes with McKinnon doing a Michael Jackson-style dance, and Levy dropping into the splits. Ostensibly, he wins the “contest,” though he can’t stand up after.

Check out the ad. Prepare for the giggles.