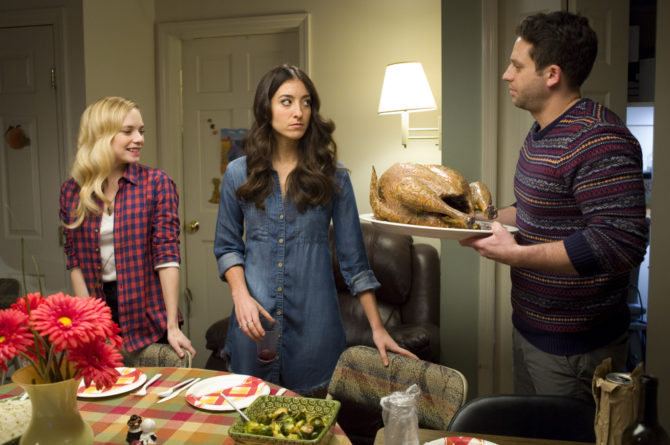 How’s that for a holiday movie?

Laurenzo’s new film, produced by comedy legend Bobby Farrelly of the Farrelly Brothers, the duo behind There’s Something About Mary and Dumb & Dumber, combines the familiar tropes of the “home for the holidays” film with the good old lesbian coming out movie.

The result combines slapstick with touching family moments. The film marks the first feature from Laurenzo, in which she aims to ripple screwball comedy with a touch of gayness.

Lauren (played by Laurenzo herself) has fallen in love with girlfriend Hailey (Caitlin Mehner) and yearns to introduce her to her crazy family on Thanksgiving.

The problem: Lauren has never actually come out to her family. When the couple shows up to meet her eccentric relatives, comedy ensues as Lauren tries to drop her bombshell news and deal with familiar family issues at the same time. The cast includes Kevin Pollack (The Marvelous Ms. Maisel), Steve Gutenberg (Can’t Stop the Music), Bruce Dern (Nebraska), and Oscar-winner Cloris Leachman (Young Frankenstein), taking on a lead role at age 92.