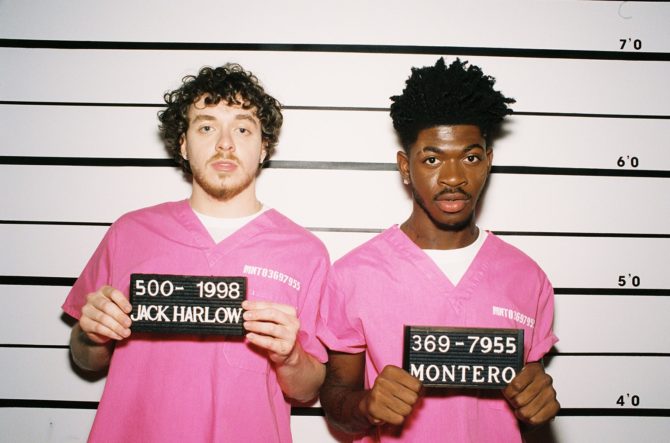 Rapper, icon and general man on fire Lil Nas X has taken to Twitter to issue an apology. The reason: the rapper didn’t get artist Jack Harlow to join him in a nude shower scene in his latest video.

The music video for “Industry Baby” dropped July 23 and met with immediate gasps, as it featured Lil Nas X and a troupe of backup dancers grinding naked in a  prison shower scene. Jack Harlow appears in the video helping Lil Nas X escape from jail, but doesn’t appear in the shower scene.

Following release of the video, Harlow–who is straight–revealed that he would have gone full frontal if asked.

“Nas wrote the whole treatment for this video and I followed his lead every step of the way,” Harlow tweeted. “If he had asked me to be in that shower scene I woulda been in that shower scene. I just let the mastermind cook. Honored to be a part of it.”

Not only did Harlow’s tweet amuse fans, but it also got an immediate response from Lil Nas X himself.

The exchange sent fans into an uproar.

You really fumbled the bag pic.twitter.com/eii2RE4gi4

You really lost this chance for everyone smh pic.twitter.com/S7ssdqBG5l

“You really lost this chance for everyone smh,” added @horchataslore.

Amid the backlash–however benign–Lil Nas X issued an apology for missing the chance to show Harlow naked.

to the lgbtq+ community i sincerely apologize. i have failed you. i am embarrassed. i am ashamed. and i will learn from my mistakes. https://t.co/CJH6v5c8dV

“to the lgbtq+ community i sincerely apologize. i have failed you. i am embarrassed. i am ashamed. and i will learn from my mistakes,” Lil Nas X tweeted.

We have a feeling Lil Nas X’s fandom–and Harlow–will forgive him. Nas X released the video for “Industry Baby” in part to raise awareness of The Bail Project, a nonprofit group aimed at ending cash bail and structural racism within the American prison system. Given that it’s for a good cause, we see no reason why he and Jack Harlow couldn’t get naked together to help boost the charity haul…