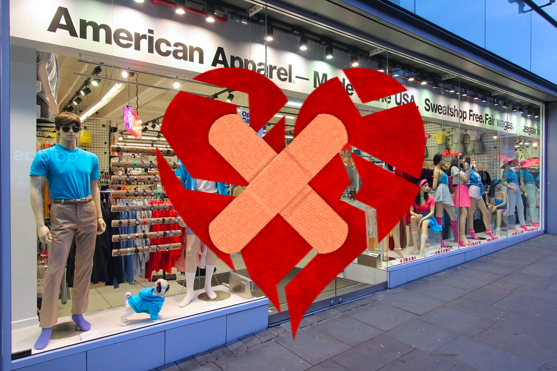 Chase Burns will always have a special place in his heart for American Apparel.

In a new column published by The Stranger, Burns writes about his decade-long love affair with the controversial Los Angeles-based clothing brand, known for its homoerotic ad campaigns and perverted CEO.

The brand was founded and run by Dov Charney from 1989 until 2014 when he was forced out after a string of sexual harassment lawsuits involving ex-employees. The lawsuits ended up sending the company into a downward spiral. It filed for bankruptcy in 2015. Then in January of this year, it was purchased by Gildan Activewear.

All of its stores are set to close by the end of this month, which means stuff is currently being discounted up to 80%. It’s a great time to stock up on those colorful boy briefs that were so very popular ten years ago.

Speaking of 10 years ago, that’s about when Burns first discovered his love for the LGBTQ-friendly unisex clothing brand.

“In 2007, my friend pulled me into her parents’ basement to show me her cousin—he was a model in an online American Apparel ad,” he explains. “He wore a purple shirt with a plunging neckline. ‘That’s a girl’s shirt,’ I told her. ‘No,’ she said, ‘that’s a V-neck.'”

He was a teenager at the time and describes American Apparel as his “gateway into the ‘gay imaginary’.”

“The clothes were simple and flamboyant,” he writes, “the boys who wore American Apparel looked like they might be down with kissing dudes. … The first shirt I ever owned that made me feel cute was from American Apparel. I lost my virginity in American Apparel briefs.”

Ten years after my first introduction to the company, one thing has remained consistent: my crush on its models. (Sales associates, by the way, are also considered “models” at American Apparel.) At 14, there was the sales associate who gave me an insider’s nod as I bought teal hot pants with my mom’s money. At 18, that boy at checkout who asked me if I wanted to buy BUTT magazine with my overpriced bow tie. At 21, that store manager who saw me eyeing a gold-lamé maxi dress and told me I’d look great in it. At so many points in my life, American Apparel has invited me to be seen as I wanted to be seen—as long as I paid.

Now, that love affair is coming to an end. And Burns has mixed feelings about it.

“I feel weird picking through American Apparel’s final season,” he concludes. “Don’t get me wrong: I’m glad it’s dead. It’s strange to romanticize a white, soulless store that was run by a manipulative creep. But while checking out for the last time, the sales associate noted: ‘Everything you’re wearing is from here.’ He was right: I’d made myself in American Apparel’s image.”