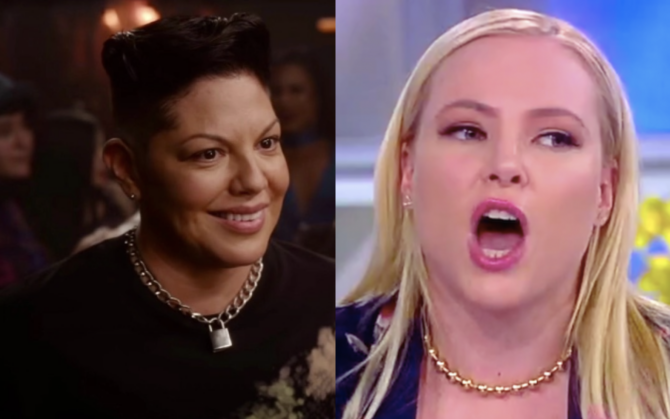 Style icon Meghan McCain is absolutely furious about HBO’s “And Just Like That” and how “woke” her once-favorite show, which she mistakenly calls “Sex in the City”, has become.

In her latest op-ed for The Daily Mail, McCain calls the reboot “misguided”, “woke”, and a “clumsy attempt to reformat the show into the woke and puritanical times we are living in.”

Among the many things McCain takes offense to is the fact that Carrie is described as a “cisgender woman” by her queer podcast co-host, played by actress Sara Ramirez, “Because it’s so boring and un-evolved to be a straight white woman.”

(Side note: If John McCain’s daughter really wants to talk about microaggressions, she should consult with LGBTQ people about how the original series depicted bisexuals.) Another thing McCain takes offense to is the show’s anti-racist messaging.

“It is wokeness superficially shoved down your throat to make a point about wealthy white liberal women ‘evolving’ into the political climate of 2021,” she writes. “Like so much of the fallacy I find in modern liberalism in major cities, these characters seem to encompass the absurdity of some progressive, woke white women.”

As a result, she says, the show is just “not fun at all. Not even a little bit.”

There are a lot of other things McCain hates, including the fashion (she calls it a “costume-party”, and not in a good way),  Mr. Big’s sudden death (she says it was “extremely depressing and confusing” to watch), and the jokes about Miranda’s teenage son, Brady, having sex (she thinks they’re “awkward, clumsy, and just gross”).

Related: The internet has THOUGHTS about that ‘And Just Like That…’ plot twist

But it’s “palpable paranoia” of the show that she seems to find most distressing.

“Shows and actors (with a few glaring exceptions like Dave Chapelle) are clearly concerned about angering the wrong people, being politically incorrect or not sufficently [sic] progressive,” she writes. “This is not a way to create fun or impactful entertainment.”

McCain concludes her review by declaring the “Sex and the City” franchise officially dead. At least, to her.

“Wokeness kills everything and I am disappointed to tell you that ‘And Just Like That’ is another victim of Hollywood trying to placate a specific audience and not the original one, which was made it a hit in the first place,” she writes.

I’ll debate you in this one.

The issue Karen, I mean Meghan, is that your opinion piece makes it glaringly noticeable that the audience has grown and evolved,as has much of the world, but you remain hungry for a show that you can relate to because after all, your view and opinion is the only one that matters

It seems tone me, that the real issue is that the characters in a fictional world have shown far more growth and maturing than you have.

Woke. Do you even know any Black people and what woke really means?

Hmmmm, sounds like these two episodes may have made you a little bit uncomfortable. I suggest you go back and rewatch the episodes and figure out what made you uncomfortable, stop making it a bad thing for people to be aware of others and how others may feel

Not to sound too woke, but it’s Sex *and* the City.

So… are you really mad that the show is bringing its characters to current times, OR…are you just mad that white men & women are finally understanding what it feels like to be aware of their skin color? To me, it feels like it’s the latter.

But yes, continue to call it “woke”

So basically because they addressed issues that deeply affects this country—like racism, stereotyping, loss, adjustment, etc.—then it’s not fun? Just say you wanted a re-enactment of the problematic original.