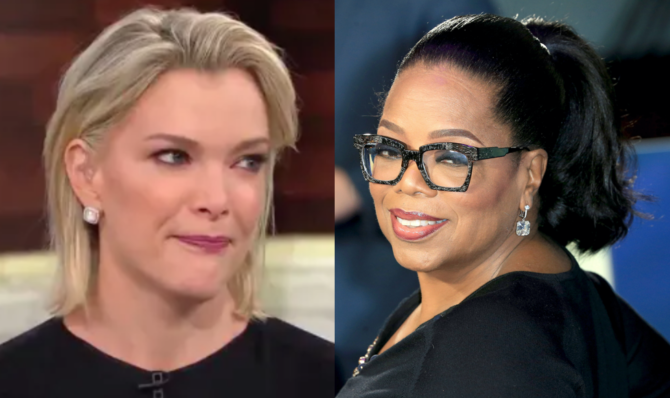 Megyn Kelly has notes… for Oprah.

Over 17 million people tuned into Winfrey’s highly-anticipated (and highly-hyped) Sunday night sit-down with Prince Harry and Meghan Markle, in which the Duchess of Sussex spoke candidly about what it was like to join the royal family. She spoke of the racism she faced, and disclosed that she’d been suicidal at one point.

The interview blew up across social media, but the former talkshow host wasn’t buying Meghan’s story.

Kelly, whose Wikipedia page now lists her as a podcast host who “is also active in posting to her Instagram page,” offered this critique of Oprah’s skills:

“Oprah stayed too broad-I wanted more: ‘who?…Be specific…what exactly did they say? Who was jealous of M after Australia? How did u know that? What do you mean ur family hasn’t ‘educated themselves’ the way u have? They’re racists? WHO?’ Eventually they’d have to get specific.”

Oprah stayed too broad-I wanted more: “who?…Be specific…what exactly did they say? Who was jealous of M after Australia? How did u know that? What do you mean ur family hasn’t “educated themselves” the way u have? They’re racists? WHO?” Eventually they’d have to get specific.

Then she took her hot take to Good Morning Britain:

‘She’s painting herself in adorations while she was making complaints that will be totally unreliable to 99% of people.’

US broadcaster @megynkelly says Meghan’s Oprah interview was full of contradictions and she was ‘completely unaware’ of how she sounded in the interview. pic.twitter.com/qJZB6xsz4W

The irony that Kelly, who was fired from NBC News for defending blackface, was sitting at home critiquing Oprah, whose production company was reportedly paid $8 million to air the interview, was not lost on people.

Here are some of the responses:

Yes I’m sure Oprah is looking for advice on her subpar interviewing skills on the subject of racism from the likes of Megyn Kelly. ? God give me the confidence of a mediocre white woman.

Everyone who believes Megyn Kelly has the experience, professionalism, or talent to critique #Oprah on how to conduct an interview. pic.twitter.com/iU1jZ6Bn7s

Megyn Kelly live tweeted her criticism of the interview for two hours. The woman who was paid $30 million to leave a network criticized Oprah's technique. I couldn't help but notice that she watched the whole thing, though.

She's a billionaire… from INTERVIEWING.

That shouldn't even be possible!

And now for commentary on whether the Royal Family is racist we go to….Megyn Kelly?

[Megyn grabs record and breaks it in two complaining that it is record scratching that ruined good old fashion white music.] pic.twitter.com/5o8dk1oM8Y

Huh. Megyn Kelly sided with the white people. Didn't see that coming, did you? https://t.co/rY1DgdWd7o

Meghan Markle: There is a difference between being rude and racist

One day, "I'm not racist but…" sprouted two arms, two legs, a head and a blonde haircut and Megyn Kelly was born.

Megyn Kelly had some notes. ?

Me: Megyn Kelly trending? Did she say something racist again?

Me: Another Monday in America.

music with a message
18