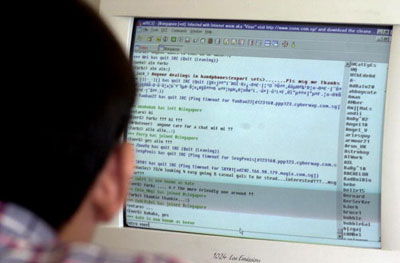 Big changes are happening over at Grindr. In January, a tech company in Beijing paid $93 million to acquire 61.5% of the app. Earlier this week, the company announced it will purchase the remaining 38.5% stake for $152 million.

All this has got Steven Blum over at Vice feeling nostalgic about the days before Grindr, when chatrooms like Gay.com, AOL, Yahoo messenger, and Craigslist were all the rage.

“For gay men, the birth of online chat rooms changed everything,” Blum reflects in his new think-piece Cruising Online Was Actually Fun Before Grindr Ruined Everything. “The gay-friendliness of your hometown didn’t matter; all that mattered was that you had a stable dial-up connection and access to a keyboard.”

Any gay man who came up during the the mid- to late ’90s/early ’00s remembers these chatrooms well. It was how we connected with other guys, honed our cybersexing skills, and arranged hookups.

“It’s all old hat in the age of Grindr and Scruff,” Blum writes, “but back then, it was a revelation.”

Related: Bathhouses And Beyond: A Brief History Of Gay Cruising

During its peak popularity, Gay.com attracted over 1 million users a day.

Mark Elderkin, the site’s founder, tells Vice, “Chatrooms were less about trading pics and more about being witty and having a back-and-forth banter with people.”

Perry Miller tells Vice his chatroom of choice was Craigslist, though he admits the platform was rather chaotic.

“It was a pain in the ass because I had to have a separate email address and copy and paste the sender’s address, attach my photos, and send it from my email,” he explains. “It was just a mess.”

But, he says, it worked.

Related: End Of An Era: Gay.Com Chat Rooms Are No More As Of Today

Then came Grindr (launched in 2009), then Scruff (launched in 2010), then Hornet (launched in 2012), and all those other hookup, er, dating apps that, in total, have attracted tens of millions of users around the world. And with them, came the death of online chatrooms.

Last summer Gay.com announced it was killing its online chatrooms after coming under new management. (The chatrooms were later reinstated after significant public outcry, but they’re still a ghost town.)

The M4M pages on Craigslist have also become less active, much to Miller’s disappointment. He still thinks Craigslist was more efficient than Grindr.

“On Grindr, [there is] all this back and forth,” he tells Vice, “but on Craigslist, it was just there for the taking.”

“While it’s easy to wax nostalgic about the relative intimacy of the early gay web,” Blum writes, “it’s also worth remembering that everything that happened online went on against a backdrop of intense homophobia.”

And he’s totally right. Chatrooms were all the rage when the idea of same-sex marriage was just that, an idea, DADT was the law of the land, gay jokes were being made on network television, and nondiscrimination laws were still considered novelties.

“Many of those who fled to AOL chatrooms, Craigslist, or Gay.com’s teen forums had to keep their online lives secret because of the stigma that swirled around homosexuality,” he continues.

When I was in high school, for example, I maintained a relationship with an older guy I’d met off Gay.com. We first met in a Starbucks’ parking lot and had sex—my first—the day we met, which felt illicit and thrilling at the time, but, in hindsight, was insane. What’s even more insane is that I didn’t tell anyone about him until college.

Related: Party Like It’s 2002: A Look Back At Gay Culture In The Aughts

In hindsight, he says, the whole thing made him feel “lonelier.”

Which, of course, begs the question: Now that chatrooms have been replaced, are apps like Grindr or Scruff any less lonely?