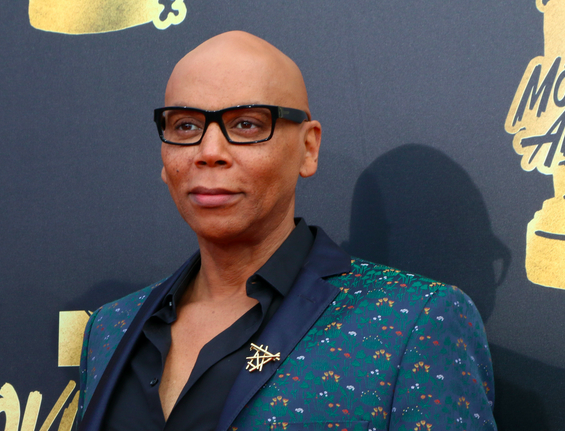 RuPaul nabbed his sixth Emmy for RuPaul’s Drag Race on Sunday. But as he and his team gathered on stage to accept the trophy for Best Reality-Competition Program, many couldn’t help but notice that Ru was alongside a largely white, cisgender male crew.

Every single person behind Rupaul on that stage is white.

Afterwards, when Essence reporter Danielle Young asked Ru about the noticeable lack of diversity, he didn’t take the question as well as he probably could have.

“I’m curious about how you feel, especially as someone who represents so strongly for the LGBT+ community,” Young asked. “Do you feel like it’s important for that to be represented behind the scenes as well?”

In the press room at the @TheEmmys, I asked @RuPaul to address the diversity or lack thereof in his show @RuPaulsDragRace. And… pic.twitter.com/kL1EYxJQXK

Ru responded first by interrupting Young to make joke about how he supports the “BLT community.”

“I love myself from bacon, lettuce, tomato,” he said.

When he finally got around to actually addressing Young’s concerns, he avoided acknowledging the lack of diversity among his show’s crew by instead pointing out his own visibility: “Well, first of all, the host of our show is Black, gay, and a drag queen. So check, check, and check!”

He continued, “But we’re pretty diverse, there are lots of different types of people here. But is it important? Absolutely.”

Then he incorrectly quoted Oprah‘s “All my life I had to fight” quote from The Color Purple.

Needless to say, Young wasn’t impressed by the response.

What bothered me about RuPaul’s response.

1. When I said he reps the LGBT community, he said also the BLT community. ?

2. He thinks bc he is Black, gay & a drag queen, that somehow is diversity quota is met.

3. He couldn’t quote The Color Purple.

4. Look at the “diversity.” pic.twitter.com/Kks07oYDsE

I don’t have any one idea about RuPaul, but I do have a wish: I wish RuPaul was brave enough to embody the same courageous and bold energy that gave him a chance to breakthrough the circumstances he was born into, and put it in service of other Black queer people’s careers.

like rupaul won an emmy and when asked about diversity… compared LGBTQ to a fucking bacon, lettuce and tomato sandwich… pic.twitter.com/6ewnwvqUNL

rupaul really said "no, we're pretty diverse, there are lots of different types here" with an array of beige last night.

where has the diversity ever been? i'm still not over having a majority black season of drag queens and a white queen still winning. pic.twitter.com/ZfLnkcAjN9

Rupaul can most certainly bring Black Queer creators to produce and direct his show and I think that’s the point on diversity. Drag Race gets its ratings from the diverse cast but when it’s award time Ru and the White folk in the back get the recognition. https://t.co/DlfN4w3p6U

Rupaul when someone asks him about diversity pic.twitter.com/i2XXAMUVgf

We’ll admit, the optics weren’t great. But if there’s one thing we know about Ru, it’s that she’s a pro when it comes to reinvention.

Over the years, RuPaul has demonstrated an ability to grow and evolve with the times. It’s part of how he’s been so successful. We wouldn’t be surprised if this time next year, as he’s accepting his seventh Emmy for Drag Race, things look a little different.

Related: RuPaul makes a huge announcement about ‘Drag Race’ in 2020