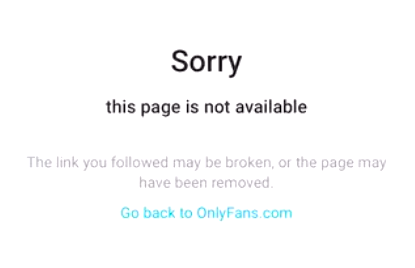 As people around the world are protesting the murder of George Floyd and police brutality against people of color, OnlyFans star Billy Santoro decided to stage a counterprotest of sorts on his social media page.

Yesterday, he wrote: “Lol. America! Lol you let your blacks loot as a way of protest. Wake the f*ck up. Shoot first.”

It didn’t take long before Santoro saw his various social media platforms begin disappearing, starting with his JustForFans page, which issued a statement afterwards confirming it had deleted his page in response to his remarks.

And here we had a good day so I put my phone away to actually take a night off. And then I checked the phone to see all the messages. His account is gone. Policing is a slippery slope and we won’t be puppets to cancel culture. This was not debatable though. It was vile. BLM.

Just before his Twitter account was temporarily suspended, Santoro insisted he’s “not racist” then claimed his remarks were an emotional response a friend who died in Philly.

“A friend of mine was killed during the looting in philly and I lashed out full of emotional stress,” he wrote. “Those who know me know I am not racist. I am hurt by the loss of my friend.”

A friend of mine was killed during the looting in philly and I lashed out full of emotional stress. Those who know me know I am not racist. I am hurt by the loss of my friend

A few minutes later, he followed that up with a half-hearted apology in which he claimed he’s had many lovers who were people of color.

“I sincerely apologize for hurting the POC with my statement,” he wrote. “I have fallen in love with many poc and understand the frustration.”

I sincerely apologize for hurting the POC with my statement. I have fallen in love with many poc and understand the frustration.

Santoro’s Twitter page has since been reactivated. His other pages remain dark.

Our friends at Cocktails and Cocktalk also note that, just hours before Santoro insisted he wasn’t racist, he posted a racist response to a Wisconsin restaurant’s statement on Black Lives Matter, writing: “Or the blacks will just breed more hatred towards them.” 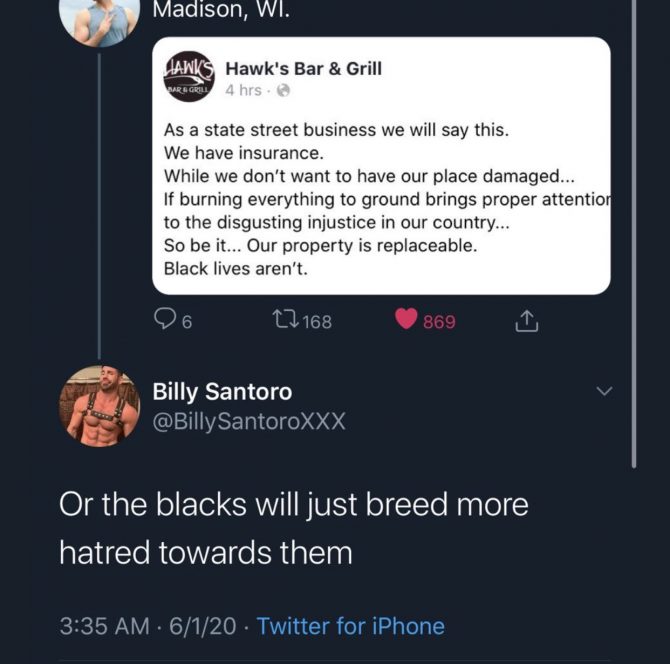 A number of people have spoken out against Santoro’s remarks and aren’t buying his apology.

Y’all it’s time to cancel this fool . Billy Santoro is straight up racist and called for the deaths of Fellow People of Color. If you are a person of color and consider yourself of fan of his , you need to reconsider and unfollow immediately.

I'm very proud of being half his size and still bulldozing Billy Santoro during kickball. I hope my being Black made him extra mad

Queerty has reached out to Santoro for comment. We will update this post if we hear back from him.