When the director of the new Netflix documentary, Hating Peter Tatchell, asked me if I’d watched the movie yet, I happened to be at home with my mom for a few days. She’s in her 80s, devoutly Catholic, and initially took a little while to adjust to the news that her son was gay.

Mom and I love each other dearly and are very close, but I didn’t think a documentary about the work of the veteran human rights campaigner – infamous for outing bishops and storming the pulpits of cathedrals – would be up her street.

When I returned home, and after watching the directorial debut from Australian filmmaker Christopher Amos, I was left wondering if I’d missed an opportunity to share something with her.

Tatchell grew up in Australia. His parents were super religious. His mom still is, and she has never really embraced his sexuality. Although she may have admiration for his passion for human rights campaigning, she clearly still struggles with the gay stuff.

Indeed, one of the most poignant moments in this movie comes toward the end. Tatchell is talking about gay propaganda laws resulting in teachers being unable to talk to kids about gay issues.

His mum replies “quite right” as it’s not for teachers to talk about such things. There’s an awkward pause before Tatchell patiently explains why it’s perfectly reasonable for teachers to tell kids it’s OK to be gay. His mom politely listens, but you know she’s unconvinced.

It’s a telling moment: After 50+ years of campaigning for human rights, Tatchell has yet to persuade even some of those closest to him why the battle for global LGBTQ rights is so important. It demonstrates how far we still have to go.

Related: UK activist Peter Tatchell: Lessons on homophobia should be “compulsory in every school”

Fortunately, Tatchell has been successful in swaying many others – and prompting conversations about human rights all over the world. This new documentary zips through his story and several of his campaigns.

It’s essential viewing for anyone who wants to know about the ongoing struggle for LGBTQ rights and will fuel debate about the best tactics to use. As Tatchell points out, no advances have come about just by politely making requests. An element of civil disobedience is almost always required.

Filmmaker Amos, 46, heralds from Brisbane. He has spent much of the last 20 years in London, where he made a name for himself as a journalist, LGBTQ activist and bar owner. He moved back to the Gold Coast in 2019.

“I wanted to demonstrate to him that I could deliver a feature documentary. Peter’s activism inspires me, perhaps the Aussie moving to London journey made his story especially significant to me.

“We first met in 2000, when I was editor of Bent magazine, and Peter regularly contributed articles. I was always surprised by how many of the LGBTQ community derided his work, despite the huge contribution he was making to advancing our rights. This struck me as an interesting premise for a story about his life, something which could be explored in 90 minutes. I wanted to highlight his achievements but also explore his motivations.”

Amos was surprised no one had made a documentary on Tatchell before.

“Peter has been approached over the years. For one reason or another, none of these got lift off, until I persevered. Peter has commented on why not sooner, recently. He suspects most media organizations have specifically avoided giving him such a platform, possibly because of the controversy he attracts.”

This controversy led to the name of the documentary.

“I was always drawn to Peter as this divisive character, having known him personally for over 20-years, I knew his heart and motivations were in the right place,” says Amos.

“Everything he was saying made sense to me. Yet, despite this, numerous people including supposedly intelligent friends of mine would often criticize Peter and his tactics.

“I wanted his name in the title and was just looking for that one word that could alter the perception of the name, that could represent the film. Eventually, I recalled Hating Alison Ashley, a novel from my childhood, and presto, we had our title, Hating Peter Tatchell. Then it just stuck.”

Tatchell recently wrote a piece for The Guardian about the movie. Amos trailed him to Moscow to film him staging a protest during the 2018 World Cup about the persecution of LGBTQ people in the country. Tatchell admits he gets sick with nerves before many of his protests (he’s been assaulted on multiple occasions and has permanent brain damage as a result). Moscow was particularly stressful, and Tatchell said it led to some arguments between him and Amos.

“There was tension, which to be fair was to be expected,” recalls Amos. “But we actually got on very well considering the stakes at play.

“For starters, it was just myself – filming, sound, directing. I had to leave a heap of equipment behind to downsize myself from being a four-person crew in one, into a tourist basically with my holiday camcorder.”

“Peter is always in control, so I literally had to just be there to capture his thoughts, actions, whatever he was planning to do. Each day we left the hotel, he had everything with him, passport, clothes, toiletries everything he came to Moscow with, just in case something happened to him. Which of course, it eventually did when he was arrested for staging a one-man protest on the opening day of the World Cup.”

The movie has been a five-year labor of love for Amos. It helped to gain support from Ian McKellen, who interviews Tatchell in the film, and input from Stephen Fry, who also features. Toward the end of production, Elton John and David Furnish came aboard as executive producers.

“Elton and David became involved after the film was nearing completion, they watched an early cut of the film and were very enthusiastic. Initially, I approached David with a request to use Elton’s moving song ‘Believe’ over the closing credits which they agreed to.”

As someone who spent much time with Tatchell, analyzing his life, what does Amos believe drives his endless activism?

“Quite simply he is fighting injustice because he loves his fellow man. Peter explains his motivation as if something happened to him, would he want someone to help. The answering being ‘yes’, drives him to help others in this long fight to bring equality to everyone.“What is unique about Peter though, this activism, speaking out, taking action, is in his DNA. He doesn’t do it for the money, let me assure you.

“He has a Christ-like calling to help those in need,” says Amos. “I personally hold Peter in high regard up there with other legendary change makers: Mother Teresa, Gandhi, Pankhurst, Princess Di. Even the former Archbishop of Canterbury, in the film, goes on record to say Peter has been on the right side of history and draws a parallel between Peter and Jesus.”

Hating Peter Tatchell is out now on Netflix (except in Australia) 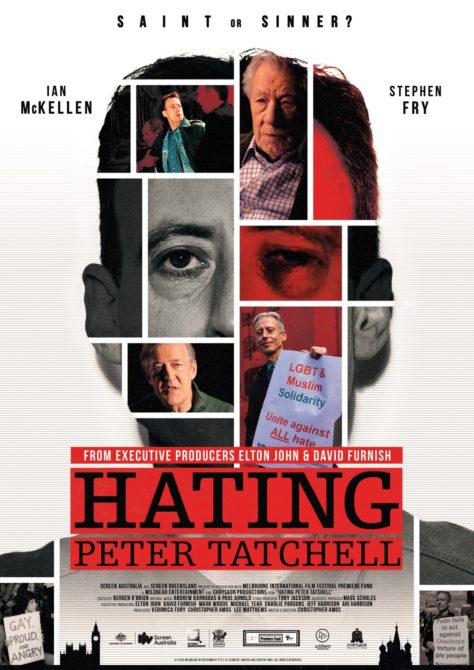