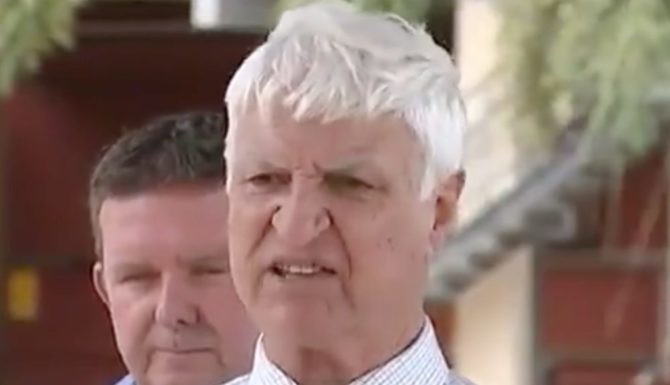 For years now, homophobic gasbags have had a problem: Every ridiculous argument they come up with against same-sex marriage is eventually pitted against facts and reality.

And would you believe it? None of them hold.

Everything from “but the Bible says,” to the “slippery slope,” to “won’t someone think of the children?!” was eventually destroyed by reason or science.

And the public has taken note. The most recent Pew Research polling puts support for marriage equality around 62% in America, and that number only stands to keep climbing.

It’s a similar story in Australia, where 61.1% of respondents voted “yes” to legalizing same-sex marriage.

So what’s a homophobe to do when every last argument against marriage equality is utterly deflated?

Noted antigay Australian lawmaker Bob Katter was understandably upset by the landslide support for same-sex marriage in his country.

Far, far less understandable, though, is his latest argumentative stance against the march of progress.

“I mean, y’know, people are entitled to their sexual proclivities,” he told a reporter. “Let there be a thousand blossoms bloom, as far as I’m concerned.” (Um, OK.)

Then the look on his face went icy cold, as he managed to deliver this line without breaking:

“But I ain’t spending any time on it, because in the meantime, every three months, a person is torn to pieces by a crocodile in North Queensland!”

As the news clip cuts back to the studio, all four hosts give Katter’s position the respect it deserves: none.

In case you missed it, here's Bob Katter's alternative view on the #samesexmarriage debate. Thanks for watching. #Insiders #auspol pic.twitter.com/iObsR1tDs1

Worked out what Bob Katter’s comments on gay marriage reminded me of. #auspol #insiders pic.twitter.com/xGXlndgpCS

i cannot move on from the bob katter crocodile same sex marriage video. i will not.

I have now watched that Bob Katter clip from @InsidersABC about a dozen times and I’m ruined. Tears flowing down my face

Bonus: here’s a clip of Katter getting utterly destroyed in a debate on same-sex marriage.