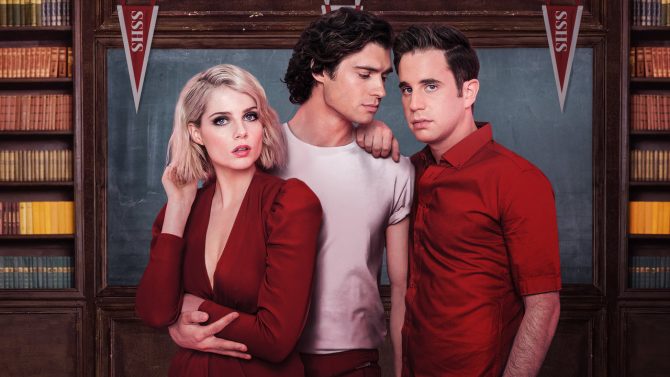 There’s a scene early in the new Netflix series The Politician that kept nagging and gnawing at me every time the comedy-drama introduced a new LGBTQ character – and there were at least seven in season one’s eight episodes.

First and foremost of them was Payton Hobart, a sexually fluid high-school senior and aspiring U.S. President played by Tony-winning Broadway star Ben Platt. Bob Balaban and a gorgeously maternal Gwyneth Paltrow portrayed his adoptive parents, so he had a lot to aspire to. His first step to world domination was becoming president of the student body at Saint Sebastian in Santa Barbara.

In the aforementioned scene, he was confronting his surprise opponent, a tall, handsome classmate named River Barkley, who looked like he’d stepped off the pages of an Abercrombie & Fitch catalog – or was walking onto a yacht. River was Payton’s Mandarin tutor-turned-undercover lover-turned-political rival-turned conscience, and Payton made a bold threat: Drop out of the race or risk his revealing their sexual trysts to the Saint Sebastian student body.

Initially, the threat struck me as being double-edged: If Payton told all, wouldn’t he be implicating himself and possibly dashing his own future Presidential hopes? He couldn’t, after all, out his secret lover without exposing himself, too, even though he hedged his bets by vowing to drop the bomb after River won. Then, as the show introduced its other LGBTQ (and questioning) characters, I started to get it. Because of River’s status among the Saint Sebastian elite and his perch atop the high school food chain, he had so much more to lose.

Payton was Richard Nixon to River’s John F. Kennedy, nebbish, uncharismatic, and, like the future Tricky Dick in 1960, given to perspiration outbreaks at the most inopportune moments (like during a Presidential debate). His sexual orientation probably didn’t matter as much because he already had so much working against him, plus he so easily could “pass” as gay anyway. If anything, his affair with River actually might have been a political plus for him, as he couldn’t be tagged as just another privileged white guy, despite his ridiculously wealthy parentage.

If The Politician presented Payton’s sexuality as a bit of a political question mark, it introduced Skye Leighton’s as a definite asset. A gender-nonconforming black woman, she entered the political fray at San Sebastian and wasn’t above wielding her triple-threat outsider status like a political grenade.

Later on, we met a gay Latino student who didn’t try to straight-wash his sexuality. He was out and apparently proud, and Payton hit him up hard for the “gay” vote, giving the Hamilton fan (naturally!) political currency. By the time another female character was revealed to be at least questioning, making her exponentially more interesting than before, I was toying with a theory: Being gay can be a political bonus, especially in high school, if you already tick another outsider box (black, female, Latino, unpopular …). If you’re white, beautiful, and male like River, a brainiac who also was able to swing a lacrosse stick competently, it could destroy your reputation and your political future before it even begins.

Openly gay U.S. Presidential candidate Pete Buttigieg may be helping to make national politics safer for the LGBTQ community, but a high school’s student body can be a much tougher crowd than the American voting public. Apparently, the hallways haven’t gotten any kinder and gentler since Mean Girls. Teens are probably more accepting of diversity overall, but the guy who appears to be Mr. Perfect in every way might always have to live up to different standards in a judgmental world.

I’m not sure if The Politician co-creator Ryan Murphy, the gay creative genius behind such zeitgeist-y hits as Nip/Tuck, Glee, American Horror Story, and Pose, had any of this in mind when developing his latest series. As usual, he packed it with a diverse cast and diverse characters (including a “thrupple,” featuring two guys and a lady), and once again, there was intriguing diversity within the diversity.

Intentionally or not, the dynamic between Payton and River during that episode-one scene perfectly reflected how the straight world often reacts to LGBTQ people. There are levels of acceptable, and where you fit in after coming out could depend on what you have going for you or what strikes are already stacked against you. Although it was never stated outright or even really implied, River’s knowledge of this may have played into the character’s fate.

That’s probably why it’s easier for an actress, a flamboyant person of color, or an everyman character actor to come out and remain highly employable in Hollywood than it is for a movie stud who is selling masculinity and sex appeal. If a Jonah Hill were to announce that he’s gay next week, it likely would have little to no effect on his sidekick appeal. A Chris Hemsworth, though, might have to rethink his entire career strategy. It wouldn’t be as detrimental to him as in 1980, but he probably would face a higher professional penalty than Hill.

It will be interesting to see how The Politician deals with Payton’s sexual fluidity in future episodes. Will the public buy the high school sweetheart-as-future First Lady narrative that he’s concocted with Alice Charles (played with a perfect balance of warmth and frostiness by Julia Schlaepfer)? Or will the ghost of River – SPOILER ALERT: for those who haven’t watched, that’s a more literal comment than you might think – ruin the dream?

I have no doubt that Payton’s season-two political rivals, both of whom were unveiled in the season-one finale, will desperately try to use it against him. For the sake of their campaign, they’d better have a stronger back-up plan.