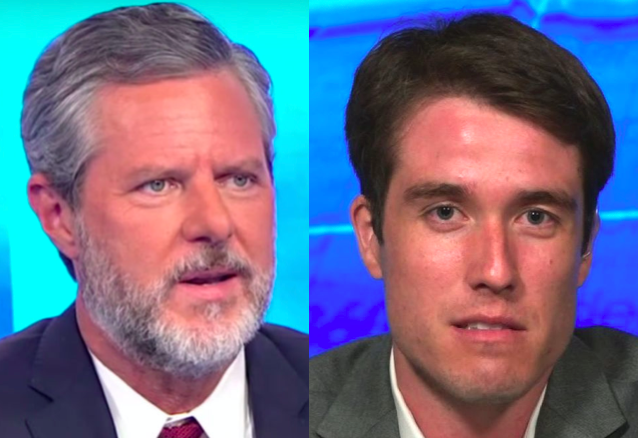 In a new interview with Fox News, former pool boy Giancarlo Granda says that, since going public with his story last month, the Falwells will not leave him alone, obsessively texting and emailing him and his friends.

Since the scandal broke, Granda says Jerry and Becki Falwell “have been relentlessly harassing me and people close to me.” He also says the disgraced evangelical power couple seem willing to do whatever it takes to ensure he doesn’t expose any more of their dirty little secrets.

“I was afraid for a long time and was constantly reminded by the Falwells of how they would come after me if I spoke the truth, which is why it took so long to speak up,” Granda says.

The 29-year-old showed Fox News numerous text messages, emails, and photos sent to him by the Falwells, which the conservative media outlet confirms seem to corroborate his allegations. Not only that, but they very clearly violate Liberty University‘s code of conduct.

“Their lavish lifestyle consisted of heavy drinking and going to nightclubs,” Granda says, “which is strictly prohibited by the honor code that they expect everyone else to follow.”

Granda adds that Falwell didn’t seem to think Liberty’s rules applied to him and that he would often pull rank and use his power as the university’s president to have stories killed.

“Everyone at Liberty University treated the Falwells like a royal family,” he continues. “Faculty, the Board, legal team and friends within the trusted ‘inner circle’ all looked the other way out of fear.”

For many years, Granda says, he was part of that inner circle, saying the Falwells “treated me like a part of the family.”

Until the relationship soured.

And we all know what happened next.

In the interview, Granda also pushes back on the Falwells claims that Jerry was not an active participant and had no idea about the relationship between Giancarlo and Becki, insisting that it was, indeed, a consensual three-way relationship.

“Jerry and Becki’s version is false,” Granda insists. “[Jerry] was aware of our relationship from day one. Jerry is incapable of accepting responsibility for his actions. Therefore, I was not shocked by his attempt to shift the blame to someone else.”

Earlier this week, it was reported that Falwell has also been making “uncomfortable” phone calls to several employees at Liberty University. The calls got so bad that the university’s top lawyer had to issue a memo urging staff not to respond to them and to cut off all communication with Falwell, if necessary.

Related: Jerry Falwell Jr. accused of even more creepy behavior because of course he is