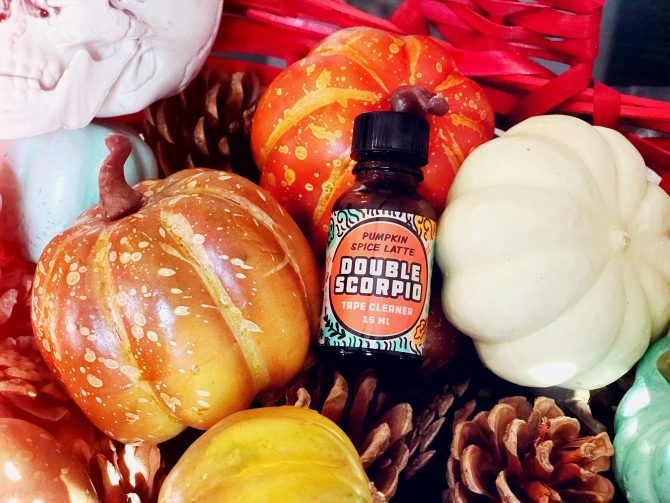 Step aside, all you Starbucks-loving, yoga pant-wearing citizens of the Earth: There’s a new basic bitch in town, and she’s down to f*ck.

At least, that seems to be the idea behind Double Scorpio’s new pumpkin spice latte poppers. Beautifully described by the company as the perfect gift for the “festive top” or “autumnal bottom” in your life (god, I love me a seasonally appropriate gay pun!), the new PSL-scented tape cleaner inhalant promises to “warm your heart with a scent thatʼs anything but basic.”

Which, obviously, meant I had to buy it immediately, and then text everyone and their mom about it… against my boyfriend’s wishes.

“People are weird about poppers still, and think of it as a party drug,” he warned, clearly an expert in the matter.

“Wtf is that?” My friend Branden asked, before texting less than a minute later. “Lol googled it nvm.”

Of course, the real gold didn’t come until later.

“So how do you get the PSL flavor in your butt?” a newly educated, but clearly still perplexed Branden asked. “Or is it only the flavor you inhale? I’ll be honest, Google has turned up a lot of competing info.”

(Can you tell that Branden is super straight? It’s adorable.)

Once it was established that no, poppers don’t go in your butt, my other friend Chris (also part of this group text, and also super straight) declared, “Lol so this is like a whippit for your boner?”

To which I immediately responded, yes! And that I had never heard anything more accurate in my life.

No matter how accurate such a statement was, the real test came down to when the actual pumpkin spice poppers arrived. Waiting for my boyfriend to get home in his sexy scrubs (he’s studying to be a medical assistant, so he’s basically a doctor), I twirled the bottle in my hands with the anticipation of a witch who knows she’s about to get herself into some serious double, double, toil, and trouble.

Finally, my boyfriend arrived, and after showing him my latest spooky treasure, we got down to business.

“Wait,” I paused, mid-make out session, because what’s hotter than stopping foreplay to talk? “What do you think it’s gonna be like?” I asked him.

“I have a feeling it’s going to be like regular poppers,” he said, “but smell like a gross artificially-scented pumpkin candle.”

“I mean, I do love me a good candle!” I said, before tearing the tiny bottle open and giving it a good, first whiff. With it came a blast of cinnamon, followed by a faint, creamy vanilla pumpkin scent.

Suddenly, under the influence, it was as if I was instantly transported to Halloween night, and — wearing the costume of Sexy Josh — all I wanted was that king size bar.

And then came the second sniff.

This time, as if possessed by a sex demon, all I could think was, “GET THAT SWEET, DELICIOUS GOURD IN MEEEEEEE,” to which my boyfriend happily obliged, thank you very much.

And the rest is history (you could even say it was a wrap… get it? Okay, only a few more Halloween puns left, I promise). Following our coitus, I asked my boyfriend his thoughts, to which he succinctly replied, “Yep, it was totally like inhaling a candle.”

“It was definitely more cinnamony than I would have liked. I wanted more pumpkin flavor,” I noted, speaking with the air of someone reviewing a pastry from an upscale french bakery, and absolutely not a controversial, magic sex elixir.

All of that to say, as a pumpkin spice enthusiast (yeah, yeah! I’m a basic bitch, sue me), I was very pleased with my experience with these autumn-inspired poppers. While they weren’t that different in terms of regular poppers, the pumpkin spice element did add a fun twist, and provided an entertaining excuse to have sex (I was reviewing these, after all; legally we had to bone for research reasons!).

So, whether you’re looking to jack-o your own lantern, or exchange potions with a partner, Double Scorpio’s PSL poppers are sure to give you an ahem, splooshing-ly spooky good time.

Just please, for the love of your favorite king size candy bar, do not put them in your butt. Just ask my boyfriend, he’s basically a doctor.

OVERALL SCORE: 4 out of 5 iced pumpkin spice lattes (because hot coffee is a social construct, and anyone who doesn’t worship iced coffee year round deserves to be cursed for life).