Comedian Randy Rainbow has apologized for old tweets that have resurfaced.

The Emmy-nominated performer has built a massive following for his political satire. His videos usually find him mocking the Trump administration through cleverly re-written show tunes. Famed for ridiculing politicians on the right, it was, therefore, all the more shocking when tweets – dating back to 2010-2011 – emerged that played on racist, transphobic and anti-semitic stereotypes.

“Why is it OK to call it a ‘white noise’ machine, yet offensive to say that I bought it to drown out all the ‘black noise’ in my building?” he said in one.

In another: “Black & White cookies R a delicious metaphor for racial harmony 🙂 But they taste better if U keep both halves segregated. I mean separated!”

And in another: “Comedy is so delicate. One wrong word and a joke can offend an entire group of people. Especially with dirty jews,” Rainbow tweeted. “I mean jokes! Dirty jokes!” 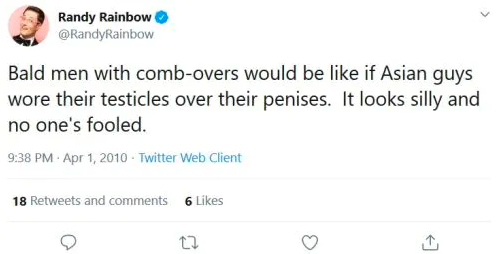 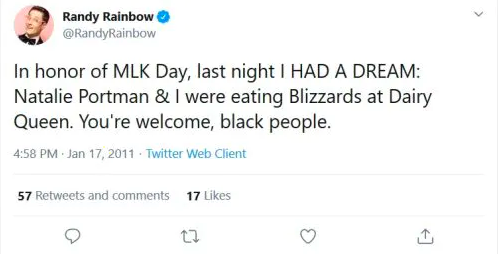 In other tweets he used the word ‘tr*nny’ for trans people or poked fun at butch lesbians.

When news of the tweets re-emerged on Wednesday, Rainbow did not immediately respond to requests for comment and most of the tweets were deleted. Late yesterday, he addressed the controversy in an interview with The Advocate.

“Twitter has recently reminded me about 10 years ago, in my maiden quest to be funny, I tweeted some jokes that were completely offensive and insensitive to look back on them now, especially with no context or nuance and through the prism of where we are in 2020 with racial inequality and the fight for social justice, which I’m proudly a part of,” he said.

“In light of issues that are now at the forefront, which I’m passionate about and have spoken up about over the years, these tweets just sound racist and awful. I’m embarrassed by them. They make me sick to my stomach, in fact, and I deeply apologize to anyone I offended.”

Rainbow said he was still experimenting with the comic persona that he has gone on to develop, and emulating the shock approach of people such as Joan Rivers and Howard Stern.

“The comedy landscape was completely different back then. This kind of edgy shock comedy was not only acceptable but a prevalent style. I was an aspiring comedian in my 20s working the stages in gay nightclubs where we said the most outlandish, raunchy things we could think of. I was searching for my comedy voice, my persona, and I was emulating styles and jokes of people that I was seeing in the mainstream.”

He went on to say, “Any jokes that I tweeted out around this time were meant to be read in the voice of this character I created, and the intention was always that my forced ignorance would be the butt of the joke.

“Now, comedy is not evergreen. Jokes have timestamps and reflect the times you’re in when you wrote them. Our world has shifted dramatically over the past 10 years and it’s moving even quicker.

“I am incredibly sorry. I would never intentionally do anything to hurt anyone. I learned many years ago, over the last decade, that there are things that you must be sensitive about. There are issues that I was not aware of back then. In 2010, we weren’t anywhere near where we are now. Right now, systemic racism is killing people, anti-Semitism is on the rise, Black trans women are being murdered at a horrifying rate. And the insensitive words of those actually in power are actually killing people. I continue to educate myself, I continue to listen and learn.

“I am in no way a racist. I am in no way transphobic. I’m a gay Jew who was brought up in a very open, accepting family,” he added. “There is not a racist or intolerant bone in my body. When I say that I have evolved with the times, I mean that my comedy has. I did not need to be taught not to be racist or transphobic because I never was.”

He argues that we are living in very different times (“A decade ago, there was room to be irreverent and insensitive about things because the real adults — the people in power — were not being reckless.”). He also believes he has been targeted because his attacks on the right are upsetting some people during a crucial election year in the U.S.

He ends by asking people to take his old tweets in the context they were written.

“I am a comedian. I’m not a politician … This scandal I’m going through might seem a little more scandalous to some because I now have this voice in the political world. I am known as the guy who calls out bigotry and racism, which is what I want to do. That’s how I want to use my platform. That’s what’s really in my heart. So these recent tweets resurfacing are not skeletons in my closet; they’re crappy jokes in my shoebox from a decade ago. I think we just need to be careful about considering the source.”