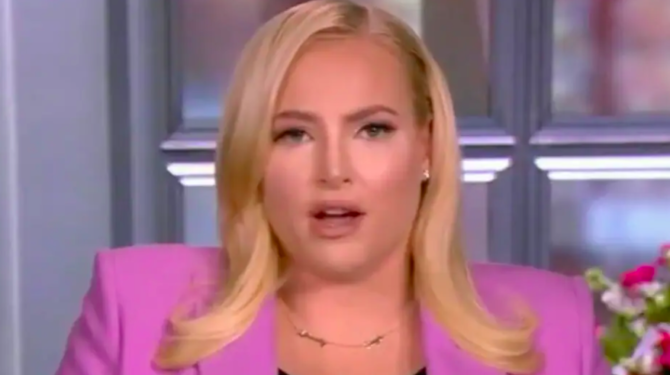 If you’re a regular Queerty reader then you know we’re not fans of John McCain’s daughter. She’s toxic and awful. But every now and then she surprises us by saying something not-so-awful. Like this morning on The View when she railed against the “MAGA sausage fest” for its obsession with “Cheeto Jesus.”

Meghan McCain was talking about equally toxic Liz Cheney, who is currently persona non grata among her Republican colleagues for having the gaul to say the 2020 election wasn’t stolen from Donald Trump and telling people to stop pushing “THE BIG LIE.”

The 2020 presidential election was not stolen. Anyone who claims it was is spreading THE BIG LIE, turning their back on the rule of law, and poisoning our democratic system.

“The message that’s being sent by the highest member of Republicans in congress is that women like me and Liz Cheney, who refuse to bend the knee to President Trump, but still remain loyal Republicans, we don’t have a place in this party,” McCain said. “We’re worthless. We’re not worth fighting for to keep. It’s Kafkaesque to spin in this any other way.”

But she didn’t stop there.

She then said that if Cheney is ousted from her leadership position within the GOP, the party will continue bleeding college educated white women, which is the voting block that cost them the presidency as well as four senate senate seats in 2020.

“Go ahead in this sausage fest of MAGA up on Capitol Hill,” she ranted. “Pull her out and put another woman in who will do anything you want for President Trump. ‘The election wasn’t stolen,’ ‘He is Jesus,’ ‘It’s only Trumpism going forward.’ See where this lands us in the midterms. I’m absolutely furious.”

.@MeghanMcCain: “The message that’s being sent by the highest member of Republicans in Congress is that women like me and Liz Cheney, who refuse to bend the knee to President Trump but still remain loyal Republicans — we don’t have a place in this party.” pic.twitter.com/9U8XqlaYUZ

Maybe it's because this is the first time in a while that Meghan McCain isn't trying to recreate a hairstyle from 'The Fifth Element,' but her calling the MAGA cult leader "CHEETO JESUS" is pretty fucking hilarious.

Her party has been anti-women since day one. This is not new.

I never thought I’d say this, but @MeghanMcCain is absolutely right. pic.twitter.com/fHvtf6G7kz

What is happening?? I agree with something Meghan McCain said, and her hair looks normal!

It concerns me when I agree with Meghan McCain