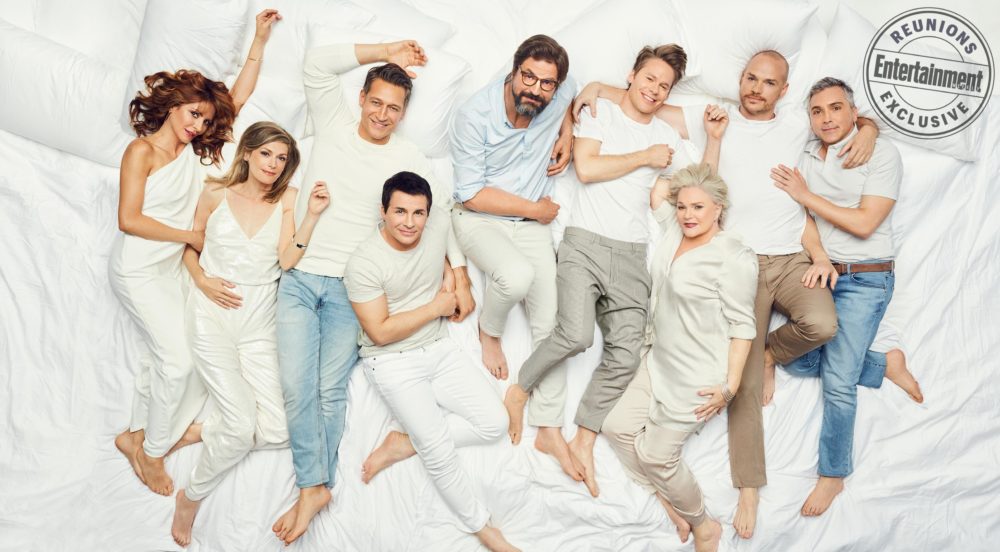 Reunited for the first time since the series wrapped back in 2005, the cast and executive producers of Queer As Folk sit down with Entertainment Weekly to reflect on the iconic Showtime series.

“We saw it as an opportunity to address a lot of issues that had never been shown on American TV before,” executive producer Ron Cowen says. “That was very important to us because we, gay people, didn’t really see a true reflection of ourselves on TV very often.”

He continues, “Back then, you couldn’t get married. There was Don’t Ask, Don’t Tell in the Army. In 14 states, there were still sodomy laws on the books. It was a very hostile atmosphere.”

“We had meetings where they told us we were going to receive hate mail and threats and we had to be prepared,” adds Michelle Clunie, who played the part of Melanie.

Oddly, most of the backlash the show received came from LGBTQ people.

“We thought the major backlash would be from right-wing religious people, but we never heard a word,” says Cowen. “The show received criticism from gay people and gay organizations, but they never said we weren’t telling the truth. As we often said, ‘If you don’t like the reflection you see in the mirror, don’t blame the mirror.'”

Related: Watch These Guys Watch Queer As Folk For The First Time

And while the final episode may have aired waaaay back in August 2005, the cast says the show still resonates with people today.

“We do fan conventions and things like that all over the world,”says Scott Lowell, who played Ted, “and that’s a pretty unique thing for a relationship-based drama.”

“God knows the clothes and the hairstyles have changed, but the emotional stories are eternal,” adds Peter Paige, who played Emmett. “I often say people came for the queer, but they stayed for the folk.”