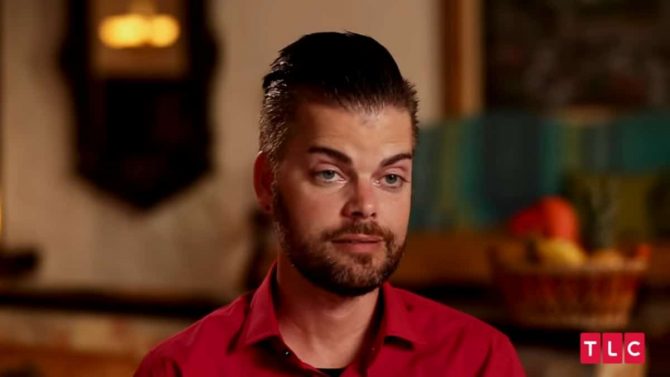 Tim Malcolm starred in the most season of 90 Day Fiancé, a TLC reality show that follows couples who have applied for K-1 visas (available to foreign fiancés of American citizens) and have 90 days to either get hitched or get deported.

Earlier this month, 40-year-old Malcolm found himself the subject of gay and trans rumors after he was accused of seeming “effeminate” and refusing to have sex with his girlfriend, Jeniffer Taranoza.

In response, Malcolm took to Instagram last month to set the record straight, writing: “Rumors are carried by haters, spread by fools, and accepted by idiots.”

Related: Reality star denies being gay or trans after fans and co-stars attack him for acting “effeminate”

Now, in an interview with Parade, he’s once again playing defense against rumors about his identity.

When asked why he has been so hesitant about consummating his relationship with Taranoza on the show, which aired its season finale last night, Malcolm explained, “A lot of people are making assumptions because of it. They’re speculating every freaking thing that could be wrong with me, my sexuality, whether or not I have erectile dysfunction or if I’m embarrassed of my penis size.”

He continued, “I mean, every illogical though you can think of is out there. But I think at the end of the day, a lot of women are just baffled by the idea that a man could sleep next to a beautiful woman and sex not be priority.”

The attacks have been coming from all directions for weeks–from his fellow 90 Day Fiancé  co-stars to fans of the show.

Last month, cast mate Dean Hashim told an interviewer, “The way he crossed his legs, man, it don’t look like he got a pair of balls between ’em. … He crosses his legs more feminine than she do.”

He continued: “My brother was saying the other day, he was like, ‘Yo, I think that used to be a female that turned himself into a man. He trying to grow up here, you know. It ain’t ready, it ain’t fresh out the oven yet man. He can’t pull his pants down yet you know? I think what it is, when they get that sex change, they gotta give it time for that peter to grow, like a sprout.”

Meanwhile, over on Instagram, someone named alishia76buhr commented on one of Malcolm’s photos, “I’ve thought since day 1 you were transgendered [sic], or gay. I haven’t seen anything that states otherwise.”

Speaking to Parade, Malcolm explained his rationale for not wanting to immediately sleep with Taranoza, saying, “It’s an invigorating day for a man when you wake up and you’re no longer controlled by your penis and that’s not the priority anymore.”

“You can actually look at what’s important because you can have the best sex ever with somebody and if you have nothing else in common, that fades and it gets boring after a while.”

Malcolm went on to say that he wanted to get the relationship “grounded” first “and then worry about the physical stuff afterwards, which apparently to America is the weirdest thing in the world.”

He continued, “I’m very surprised that of all the comments that people have made, that that was the thing that people were the most thrown off by. If a woman says, no, it’s OK. But if a man says that, oh my God, he must be gay. You can’t win in that situation.”

Related: Reality star denies being gay or trans after fans and co-stars attack him for acting “effeminate”