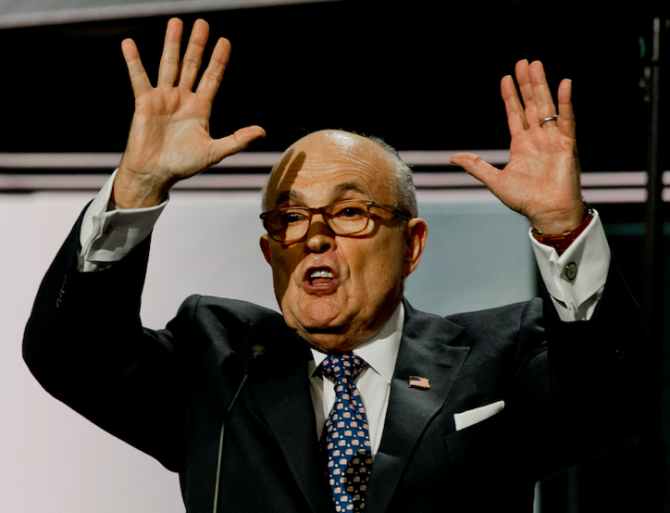 They say admitting you have a problem is the first step to recovery. Unfortunately, Rudy Giuliani isn’t quite there yet.

“I’m not an alcoholic,” the former Mayor of New York told a local media outlet this week in another completely unhinged and unnecessary interview. “I’m a functioning! I probably function more effectively than 90 percent of the population!”

Asked whether he’s ever given an interview whilst intoxicated, Giuliani first said “never” then quickly amended his answer to say, um, actually he doesn’t think he has but he’s not 100% sure.

“I don’t think I’ve ever done an interview drunk,” he said. “I mean, I drink normally. I like Scotch. I drink Scotch.”

In the same interview, Giuliani, who was recently photographed shaving at a table inside an airport restaurant, said he’s aware people think he’s “off the rails” but “I don’t care.”

“What’s happened is, our country has gone off the rails,” he said. “I’m exactly the same person. They changed!”

Look at these disgusting filthy nasty slob @RudyGiuliani shaving in a restaurant at JFK yesterday.
You nasty pig you #Rudy

As as for the billion dollar defamation lawsuit he’s wrapped up in, as well as the federal investigation into his alleged illegal dealings with Ukraine, the 77-year-old says it’s all a bunch of hooey and that he’s done “nothing wrong.”

“This is as unconstitutional as you can get,” he said. “Investigate my life, even my time as Mayor for some crime, or something they can distort into a crime.”

“They’re not nice. They’ve been investigating me for two and a half years!”

In a followup text with the reporter, Giuliani seemed to imply that reports of his dire financial situation are true and that his bank accounts are nearly depleted, writing that investigators “can come close to bankrupting me. Screw ‘en [sic] they are destroying equal justice and I will beat them because I’ve done nothing wrong and they have become distorted, unethical and even illegal prosecutors.”

Yep! That definitely sounds like a “functioning” adult who is not an alcoholic to us.