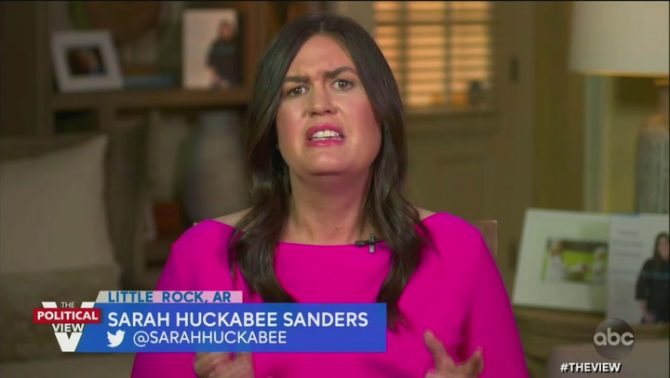 Former White House press secretary Sarah Huckabee Sanders has a new book out. In it, she shares some of her favorite and most endearing memories of working with Donald Trump. Like the time he asked her to “take one for the team” by sleeping with Kim Jong Un. Or how he used to reward her for doing a good job by giving her Starbursts.

This morning, Sanders stopped by The View to plug the book and let’s just say things didn’t go well. At all.

Me looking at Sarah Huckabee Sanders on #TheView right now. She can't help spouting BS
I can't with her pic.twitter.com/JKa6XPtBSQ

Among the topics Sanders discussed were police brutality and the calls for racial justice happening all across America, which she insisted has only occurred in “Democrat-led cities.”

Then she pivoted to talk about how Donald Trump has “empowered” so many Black Americans during his first three and a half years in office, though she failed to offer any good examples of how he’s done this.

Sarah Huckabee Sanders (a White woman) is on @TheView saying that Trump has empowered the black community. I’m not sure what community she’s referring to. I’m a black woman who probably knows more black people than she does and no one I know feels empowered by Trump.

She also spewed some nonsense about being a working mom and how “the liberal mob” is out to get her and her kids and are constantly criticizing her weight, her hair, and her mothering skills.

But perhaps the most heated moment happened between Sanders and Meghan McCain, who pressed her on Donald Trump’s purportedly calling fallen U.S. soldiers “losers” and “suckers.”

Of course, Sanders denied this ever happened, even though it has been confirmed by every major media outlet, including Fox News.

“After spending nearly every single day for two-and-a-half years with the president I can tell you I witnessed firsthand the president’s respect and admiration for the men and women of our armed forces,” she blabbed.

When McCain mentioned that Trump has a long history of denigrating veterans, Sanders once again insisted that wasn’t true.

To which, McCain replied, “The problem with the story is it seems like something he would do. And I don’t doubt that you’ve had experiences and I’ve seen videos with President Trump and troops and his family. But this has not been my experience.”

“I understand you have to do a job because you are his surrogate and you are his supporter,” McCain later concluded. “But at least concede that it has to be very uncomfortable to have this kind of conversation with me right now.”

.@SarahHuckabee Sanders responds to ‘Atlantic’ article alleging Pres. Trump made offensive comments about the military, saying “it didn’t happen”: “I witnessed first hand the president’s respect and admiration for the men and women of our Armed Forces.” https://t.co/6IHe5TAWUs pic.twitter.com/krm3tPKcKV

Shortly after leaving the show, Sanders took to Twitter to complain about how the women were rude and tried to cut her off when she was speaking.

“No surprise @TheView tried to cut me off when I started exposing the pattern of unchecked mob violence in Democrat-run cities,” she tweeted.

Read the truth about our fight against the liberal mob in my new book, available NOW at https://t.co/NpuyebjBHb pic.twitter.com/8LOAha4h1F

Sanders’ book hits bookstores this week. You should be able to find it in the bargain bin around this next next month.

Related: Memers have zero sympathy for Sarah Huckabee Sanders after she’s kicked out of a restaurant